In both cases, the hydrogen producer can enter into a virtual supply arrangement for the renewable electricity or RNG and still earn valuable credits under the California low-carbon fuel standard (LCFS). The contracts must be carefully structured, and the company must follow various other requirements.

This article discusses what a hydrogen producer should know if it wants to generate LCFS credits for hydrogen using a virtual feedstock supply.

A green hydrogen company has two options for where to locate its production plant.

The main problem with this arrangement is that the best solar or wind resources are usually far from the potential demand for hydrogen, which is typically from industrial facilities in urban areas.

Hydrogen is not easy to transport. It has to be moved by truck or through pipelines. Both involve additional costs and logistical challenges. Dedicated hydrogen pipelines do not exist and will be expensive to build. There are ongoing studies investigating how much hydrogen can be blended with natural gas and transported in existing natural gas pipelines.

Another issue is the intermittency of solar and wind production. To reduce the cost of hydrogen as much as possible, the electrolyzer should have a high utilization. Connecting an electrolyzer directly to a solar or wind farm and producing hydrogen only when the sun shines or the wind blows increases the cost of the hydrogen, potentially making it uncompetitive with fossil-fuel hydrogen and other fuels.

The second option may be better. The developer can put the electrolyzer near the customer or customers for the hydrogen. The electrolyzer would not be directly connected to the solar or wind project that it claims as the source of electricity. Instead, it draws power from the local utility but signs a virtual power purchase agreement with a more distant solar or wind electricity supplier that is financially settled.

This structure is not new. Many companies that have bought large quantities of renewable energy (such as technology companies and big box stores) have done so by entering into virtual power purchase agreements. Such contracts allow the corporate buyer to say its facility is running on green energy and to lock in a fixed price for electricity that it would not otherwise have when relying on the local utility for power.

The main advantage of using a virtual supply arrangement to produce hydrogen is the lower carbon intensity of the overall production process. This allows the hydrogen producer to earn the maximum amount of LCFS credits.

The second advantage with off-site electricity production has to do with expertise. A hydrogen company is not necessarily in the business of solar or wind production. The converse is also true: solar and wind developers may not have expertise in hydrogen production. By decoupling the solar or wind project from the hydrogen project, different companies can be responsible for building different components of the facility, each sticking to its area of expertise.

The third advantage has to do with utilization. Solar or wind projects are frequently built at the hundreds-of-megawatts scale to take advantage of economies of scale. A hydrogen producer may not need to purchase all of the output. With a virtual supply arrangement, a hydrogen producer can purchase a portion of the output, with the remainder being sold to a different party.

The same advantages also apply to hydrogen produced from off-site RNG. De-coupling the facilities allows the anaerobic digester to be built where a ready supply of biomass exists, while the steam methane reformer can be put close to the hydrogen customer. The steam methane reformer can be physically supplied by natural gas from an interstate or intrastate gas pipeline in California, but virtually supplied by the RNG facility in another state.

The LCFS regulations explain how to claim credits while relying on virtual electricity or RNG supply arrangements. 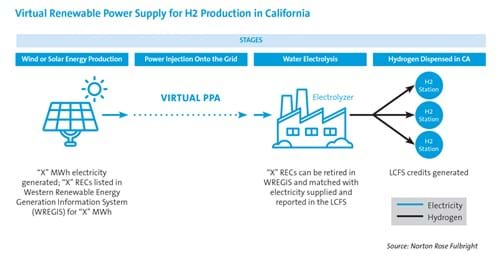 Hydrogen producers and retailers can earn valuable credits under the LCFS to help cover the cost of projects. These credits can form the basis for a project financing. (See "Financing California hydrogen projects using LCFS credits" in the December 2020 Newswire.)

LCFS credits are awarded to suppliers of low-carbon-intensity transportation fuels in California to service stations and other retail or wholesale outlets. (The fuel needs to be sent to some facility or location where fuel is dispensed into vehicles, aircraft or ships.) The fuels must have a carbon-intensity (CI) score below the annual benchmark established by the California Air Resources Board (CARB).

There are three ways to qualify for credits under LCFS. One is through pathways-based crediting under which a supplier of hydrogen directly to service stations or other retail or wholesale outlets receives credits by obtaining a certified CI score and reporting the quantity of fuel put into motor vehicles on a quarterly basis. The CI score depends on the production process, called the "fuel pathway," used for converting feedstock into a finished fuel.

A hydrogen company can power its electrolyzer using electricity from the local utility, but still report the use of 100% renewable electricity in its LCFS fuel pathway application if a number of requirements are met.

The first requirement is for the LCFS applicant to show that the electricity was generated by it, or supplied to it under contract, and it is entitled to all the environmental attributes of the claimed electricity. The applicant must make its power purchase agreement available to CARB upon request.

Generation invoices or metering records must be made available to substantiate the quantity of renewable electricity produced. Monthly invoices must be un-redacted and show the electricity purchased in kilowatt hours and the contracted price.

The third requirement has to do with additionality. Any electricity procured by a utility, community choice aggregator or other load-serving entity for the purpose of claiming a lower carbon intensity must be in addition to that required for compliance with the California renewables portfolio standard (RPS) or, for hydrogen produced outside of California, in addition to local renewable portfolio requirements of the state where the utility is located.

In California and several other western states and territories, RECs are issued and tracked in an online system called the Western Renewable Energy Generation Information System (WREGIS). Utilities and other load-serving entities can use or "retire" RECs in the WREGIS to demonstrate compliance with RPS procurement requirements to which those entities are subject. However, if the electricity is being used for electrolytic hydrogen production, then the hydrogen producer must retire the RECs in the WREGIS for the express purpose of generating LCFS credits. Doing so will remove the RECs from circulation and prevent a utility from counting the RECs toward RPS targets.

The LCFS regulations also specifically address the use of distant RNG.

Instead of physically supplying the RNG directly to the electrolyzer, the RNG counts toward LCFS requirements if it is injected into a common carrier pipeline in North America even though it ends up comingled with fossil natural gas.

There are two requirements for this to work.

The first requirement is for the LCFS applicant to substantiate RNG quantities injected into the natural gas pipeline system.

The hydrogen producer must demonstrate a link between the environmental attributes of RNG, measured in mmBtus or therms, with corresponding quantities of natural gas withdrawn. It must provide CARB with un-redacted monthly invoices showing the quantities of RNG purchased and the contracted price per unit, as well as the un-redacted contract by which the hydrogen producer obtained the environmental attributes.

Like in the case of grid electricity, RNG purchased counts only if it can be matched to RNG used to produce hydrogen within a three-quarter time span. If a quantity of RNG is pipeline-injected in the first calendar quarter, the quantity claimed for LCFS reporting must be matched to natural gas sold in California as RNG no later than the end of the third calendar quarter. After that, any unmatched RNG quantities expire for the purpose of LCFS reporting.