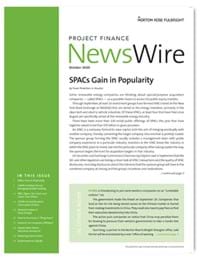 Some renewable energy companies are thinking about special-purpose acquisition companies — called SPACs — as a possible means to access the public equity markets.

Emerging markets will struggle to adjust to whatever new rate replaces LIBOR. It will affect cross-border lending.

FERC opens one door and closes two others

Three orders by the Federal Energy Regulatory Commission in September will have significant effects on different segments of the US independent power industry.

More than 1,000 COVID-19-related insurance lawsuits have been filed in the US under business interruption insurance policies. The British High Court decided a test case in September.

The solar industry has anecdotally begun raising concerns about whether solar power plants are underperforming compared to their P50 output forecasts.

How to construct a “ring fence”

Courts and rating agencies look at six factors to decide whether a project has been adequately ring fenced.

The Internal Revenue Service answered more depreciation bonus questions in September. Most companies may delay deductions until next year in case Biden wins and increases the corporate tax rate.

Almost 64% of corporate PPAs in the United States to date have been with technology companies with significant data center operations.

A class of chemicals under increasing regulatory scrutiny at both the federal and state levels should be on the radar screens of project developers to avoid getting caught up in someone else’s mess.

China is threatening to put some western companies on an “unreliable entities” list.

The Trump bulk-power system order said guidance would be issued by the US Department of Energy by September 28, but November may be more realistic.

More than 3,400 companies have filed suit against the Trump administration to get back tariffs paid on Chinese products.

No new offshore wind leases will be issued by the US government for the area off North Carolina, South Carolina, Georgia and Florida for a 10-year period starting July 1, 2022.

Another public utility property ruling was issued by the Internal Revenue Service.

New York property taxes must be paid on a solar project on land owned by Cornell University, a court said.

Hawaii is cancelling a 35% tax credit for solar projects that are five megawatts or larger in size and that have power purchase agreements that must be approved by the public utilities commission.

Payments into a state fund to pay for wildfire damage can be amortized for US tax purposes over 15 years, the IRS said.

The US Justice Department said that a $237,000 fee that a US fund manager planned to pay an investment bank owned by a foreign government would not trigger prosecution under the FCPA.