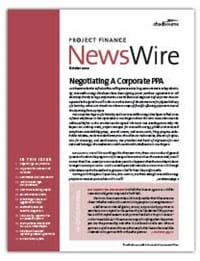 As it becomes harder to find utilities willing to enter into long-term contracts to buy electricity, renewable energy developers have been signing power purchase agreements to sell electricity dir...

Community choice aggregators (CCAs) could displace as much as 20% to 40% of electricity load in California. They are a new kind of offtaker of renewable power...

By Richard Matsui, Jason Kaminsky and Jared Blanton, with kWh Analytics in San Francisco The solar market needs a revenue put like what is now used to finance merchant gas-fired power plants, exce...

Conditions in Jordan are perfect for rapid growth in commercial and industrial solar...

How to grow: Raising capital

Many small developers lack capital to take their projects through construction. They end up seeding projects for larger developers...

The Internal Revenue Service has issued three private letter rulings confirming that a 30% investment tax credit can be claimed on batteries that are installed as part of renewable energy projects...

As the community or shared solar model becomes more popular, people are asking whether the customer agreements under which customers subscribe to a share of the electricity or buy into a community...

Net metering: Opportunities on the road to reform

The South African Department of Energy released a preliminary information memorandum in early October that explains how the department plans to procure LNG-to-power projects...

By Jeff Bodington, with Bodington &amp; Company in San Francisco Optimizing a portfolio of generating assets by weeding out some assets in the portfolio or adding others is about enhancing synergy...

The global climate deal reached in Paris last year is on the verge of entering into force.

Tax equity transactions in which the investor agrees to a deficit restoration obligation may need a fresh look.

Project developers are more likely to have to pay taxes on any appreciation in project value when forming a partnership or joint venture with a money partner under new IRS regulations issued in early October.

Chinese acquisitions of US companies

Partners sometimes use guarantees to try to shift the ratio in which debt at the project or partnership level is put in the “outside bases” of partners.

Indian tribes lost a round with the IRS.

REITs remain hard to use for solar projects.

Municipalities have greater flexibility to negotiate terms with private companies to operate and maintain municipal facilities after new guidelines the IRS issued in late August.

Utilities are starting to fight back as renewable power companies enter into power contracts directly with large industrial customers.

The recent release of a preliminary information memorandum (“PIM”) by the South African Department of Energy (“DoE”) provides some helpful guidance on the proposed parameters and policy framework ...