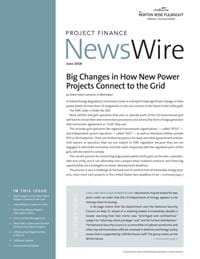 Big changes in how new power projects connect to the grid

A Federal Energy Regulatory Commission order in mid-April made significant changes in how power plants of more than 20 megawatts in size can connect in the future to the utility grid.

Governments and utilities in sub-Saharan Africa are sending a clear message in recent meetings that what really interests them is solar projects with battery storage.

A group of panelists talked at an Infocast community choice energy conference in La Jolla in April about the types of risks facing CCAs and how they manage them.

When traditional forms of funding are unavailable because private investors are risk averse, enthused philanthropic organizations have devised ways to minimize risks and thereby lower the barriers to private in

Infrastructure opportunities in the US

The US Environmental Protection Agency proposed in late April to limit the scientific studies that it will take into account when writing future agency regulations related to air pollution, toxics and other hea

Coal and nuclear power plant retirements may be halted for two years under an order that the US Department of Energy appears to be moving closer to issuing.

Import tariffs and the possibility of an escalating trade war are being watched warily by US developers.

Renewable energy developers reported coming into 2018 that the competition for power purchase agreements to supply electricity to utilities and corporate offtakers was “brutal.”

Production tax credits for renewable energy projects will remain unchanged in 2018 from 2017 levels, the Internal Revenue Service said in late May.

Master limited partnerships are losing some of their appeal.

Hawaii is looking for a new business model for its regulated utilities.

The Federal Energy Regulatory Commission opened an inquiry in April into its process for approving new gas pipeline projects. Comments are due by July 25.

North Carolina reaffirmed that solar rooftop companies may not enter into contracts to supply electricity to homeowners or businesses in the state.

Florida confirmed that contracts used by Sunrun to lease solar equipment to customers are not retail sales of electricity.

The US Treasury and the White House Office of Management and Budget reworked a 1983 understanding that new tax guidance generally does not have to be vetted by OMB before it can be made public.

Corporations with tax years that straddled year end 2017 got instructions on how to calculate their 2018 US taxes. An issue arises because the corporate tax rate fell from 35% to 21% on January 1, 2018.

The US government offers a tax credit for trapping carbon dioxide emissions from any industrial source and then either burying it permanently underground or using it for enhanced oil recovery.

British overseas territories, like Bermuda, the Cayman Islands and the British Virgin Islands, will have to post public registries disclosing ownership of companies based there.

Enforcement actions were down 50% in the first quarter of 2018 compared to the average number over the last 10 years.

Coal-fired power plants accounted for 28.1% of US electricity generation in the first quarter of 2018, according to the latest Electric Power Monthly from the US Energy Information Administration in late May.