When traditional forms of funding are unavailable because private investors are risk averse, enthused philanthropic organizations have devised ways to minimize risks and thereby lower the barriers to private investment.

The impact investment mechanisms they use include guarantees, first-loss reserves and other structures.

The Global Impact Investing Network, an industry association for social finance, defines “impact investments” as “investments made into companies, organizations and funds with the intention to generate social and environmental impact alongside a financial return.” In May 2017, the association published the seventh edition of its annual impact investor survey. Collectively 208 respondents reported managing a total of $114 billion in impact assets. In total, 205 investors committed more than $22 billion to impact investments in 2016 and are expected to commit 17% more ($25.9 billion) in 2017. Figures for 2018 are not yet available.

Guarantees are used to enhance credit. Only creditworthy projects can secure financings. Sometimes one or more narrow risks are scaring away private investors. Guarantors are usually third parties who contribute to impact investments by partnering with public institutions to offer a loan guarantee (often in the form of a grant) to reduce particular risks and potential losses. Hypothetically, this could be seen within a multi-layered capital structure like a social investment bond or SIB featuring senior investors, subordinate investors, recoverable grants, non-recoverable grants and guarantors. SIBs are discussed in more detail later in this article.

Some of the first SIBs in the United States had guarantors like Bloomberg Philanthropies and The Rockefeller Foundation.

According to the Global Impact Investing Network, guarantees have covered 9% to 75% in impact investment capital.

Community-based solar projects, battery backup, distributed co-generation and micro-grids are all areas within the renewable energy sector that could benefit from guarantees. These projects involve new business models that could benefit from credit enhancement while in the testing and proving stages. Community solar projects often require financing on longer terms than banks are prepared to lend. Guarantees could be used in such cases to cover refinancing risk.

The challenges to using guarantees in impact investment include perception issues. Philanthropic organizations might be reluctant to be seen only as a last-resort option to “bail out” deals gone bad, which could be addressed in part by holding a diverse impact investing portfolio of investments and loans as a form of downside protection. Additionally, there are only a limited number of organizations that are willing and able to provide third-party guarantees with the structure and coverage levels needed.

Catalytic first-loss capital — called CFLC for short — refers to an investor, or grant-maker, agreeing to bear the first losses for an impact investment in order to catalyze participation by other investors.

The fact that someone else will take the first-loss position makes other investors more likely to invest, assuming the particular risk is a reduction in revenue rather than total inability of the project to perform.

The first-loss position can be shed to an impact organization through a range of instruments, including grants, capital contribution commitments, subordinated debt and guarantees.

The fact that a philanthropic organization or public entity like a green bank is willing to take the first-loss position improves the risk-return profile for private-sector investors. At the same time, it helps to channel commercial capital toward the achievement of certain social or environmental outcomes.

CFLC can play a critical role in the impact investing industry. It helps to test new business models, increase investor familiarity with community investing, and make capital available on appropriate terms for new types of deals. For philanthropic organizations or public finance institutions, social aspects play a more important role than financial returns. Thus, they have room to play the role of a CFLC provider to help unlock capital from investors with more interest in financial returns.

Many impact investors choose to invest through funds whose social, environmental and financial goals match their own. Major financial players like Blackrock and Goldman Sachs have reportedly ramped up their impact investing offerings in response to client demand.

Impact investment was responsible for more than $114 billion in assets in 2017, ranging from equity shares in real estate (particularly renewable energy real estate) to loans for businesses in emerging markets and social enterprise investments within developed economies. The Wharton Social Impact Initiative reported that the pooled, internal rate of return on 170 impact investments, made solely by private equity funds through 2017, was 12.9%.

The United Nations Development Programme defines social impact bonds as a form of public-private partnership where one or more investors provide upfront capital for the realization of public projects that generate verifiable social or environmental outcomes.

Under a typical model, the government contracts with an intermediary or project sponsor to implement a social or environmental project in exchange for the promise of a payment contingent on the social outcomes delivered by the project. 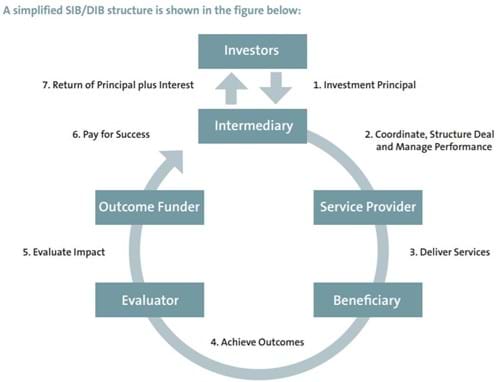 The intermediary, service providers and anchor investors will then conduct assessments to determine whether the project is viable. After developing a detailed project plan and metrics for measuring success, the intermediary raises the capital for the project from commercial and philanthropic investors. Once enough funds have been raised, the service providers begin to execute the program. At some time after implementation, an independent third party uses the agreed metrics to evaluate whether the project is a success. If the program meets or exceeds expectations, then the outcome funder will repay the full amount of upfront capital plus a return on the invested capital. If the project is not successful, then there is no payment.

Development impact bonds or DIBs are similar to the SIB model. Unlike SIBs, DIBs involve donor agencies, either as full or partial sponsors of outcomes, and the project is by definition in a developing country.

SIBs and DIBs are not bonds in the traditional sense. Investor returns are linked to results. SIBs and DIBs operate as equity investments with investors owning a stake in the project and later receiving dividends if the project is successful. The approach is also referred to as pay-for-success in the United States.

A notable recent example of a SIB is the DC water environmental impact bond that was issued in September 2016 by the District of Columbia Water and Sewer Authority in an effort to redirect approximately two billion gallons of sewage overflow away from the Chesapeake Bay to improve water quality in the US capital. The Authority used a pay-for-success model to share performance risk between itself and investors. Under this model, its cost of capital (the interest paid to investors) would be reduced in the event of flow reduction underperformance. Its cost of capital (the return to investors) would increase in the event of flow reduction overperformance.

A social success note or SSN is a concept that was developed and piloted by The Rockefeller Foundation and Yunus Social Business. It is an innovative pay-for-success financing mechanism that addresses the investment gap for impact-oriented enterprises.

The SSN serves two goals: to attract private capital while placing the risk of the impact not being achieved on the investor. Unlike other pay-for-success models, where the returns to the investor are linked only to the outcomes, the impact risk is limited to the return portion that is provided by the philanthropic organization. The philanthropic organization stands to achieve the desired impact for a limited cost and bears no cost if the impact is not achieved.

Private foundations have been instrumental in advancing impact investments. An initiative called “Smart Power for Rural Development,” launched by The Rockefeller Foundation, is an example of an effort aimed at spreading use of renewable energy to areas that are lagging adoption of renewable energy in major markets. This $75 million initiative began in 2015 to promote decentralized renewable energy projects to India and some countries within sub-Saharan Africa.

Gates later established Breakthrough Energy Ventures, a fund with a capitalization of $1 billion and a goal of bringing reliable and cost-effective clean energy to parts of the world that are not currently served by it. What is unique about the venture fund is that it provides a space for investors who are patient and tolerant of risks. Investors determine profitability through the lens of risk-adjusted returns over a longer trajectory of time as compared to other funds. Meanwhile, the coalition advocates for the private sector playing a larger role in the procurement, management and distribution of energy, as compared to relying solely on public resources.

In 2016, global wind and solar company Mainstream Renewable Power closed a $117.5 million equity financing package as part of its funding commitment to Lekela Power to build 1,300 megawatts of solar and wind power projects across Africa over three years through 2019. The Rockefeller Brothers Fund, a private grant-making foundation, was part of the investor consortium that also included entities such as the International Finance Corporation and Latin American & Caribbean Fund. The deal was evidence of the increased interest among private and public-sector investors to ensure that not only are there reasonable financial returns, but there is also a positive social and environmental component.

The Dutch Infrastructure Development Fund invested in 2013 in a special-purpose vehicle set up by Newcom, LLC, a Mongolian clean energy and company, to finance the construction of the Salkhit wind farm and related transmission lines in Mongolia to bring the power to the electricity grid. The total investment was €21.4 million of senior debt and €5.3 million of equity. The European Bank for Reconstruction and Development was a co-investor, alongside the Mongolian developer. The wind farm offsets 180,000 tons of carbon dioxide emissions per year, saving 1.6 million tons of fresh water and reducing coal usage by 122,000 tons annually. ¥