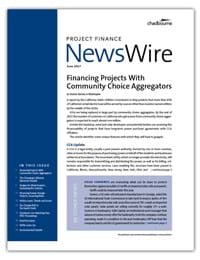 With a dearth of traditional utility PPAs for US wind projects{comma} project sponsors are evaluating alternative offtake arrangements.

Technological and cost breakthroughs are expected to lead to rapid growth in the number of utility and behind-the-meter storage projects.

Most renewable energy projects in the United States are financed with a combination of equity, tax equity and debt.

Two initiatives that have the potential to affect project developers are currently stalled at the Federal Energy Regulatory Commission, but should start to move once recent Trump nominees are confirmed to

Inverted leases are a structure used to raise tax equity for renewable energy projects. The structure is used mainly in the solar rooftop market.

Forty-three entities have expressed interest in borrowing from the US government under a new WIFIA loan program administered by the US Environmental Protection Agency.

The US Environmental Protection Agency has begun a systematic process of withdrawing or modifying various Obama-era environmental regulations.

Solar companies are evaluating what can be done to protect themselves against possible US tariffs on imported solar cells and panels.

Production tax credits for wind{comma} geothermal and closed-loop biomass projects will increase slightly in 2017 from 2016 levels{comma} the Internal Revenue Service said in late May.

DOE wants a share of the sale proceeds from a project that was paid for partly with US government money.

A community solar project owned by a utility received a favorable tax ruling.

Energy storage systems will qualify for a tax credit in Maryland under a new law signed by the governor in May.

A wood pellet company can operate as a master limited partnership{comma} the IRS said.

An Arizona Appeals Court said property taxes do not have to be paid on most rooftop solar systems in the state.

US wind capacity stood at 84{comma}143 megawatts at the end of March 2017{comma} after developers installed almost 2{comma}000 more megawatts in the first quarter.

SSR, an independent investment research company, estimated in May that electrification of the entire 260 million US vehicle fleet would increase electricity demand by a third...