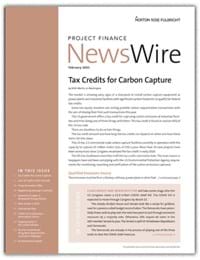 The market is showing early signs of a stampede to install carbon capture equipment at power plants and industrial facilities with significant carbon footprints to qualify for section 45Q tax credits.

Many developers struggled during 2020 to find tax equity. Interest rates remain at historic lows. The 30-year treasury bond rate was up 21.8% through February 12 compared to year end 2020. It still stood at...

Power purchase agreements that settle based on “proxy genera-tion” are becoming more common for wind and solar projects. Such power contracts are a variation on a type of hedge called a “contract for...

Investors watch for potential inflection points in markets. Many people will be focused this year on what changes the new Biden administration will make to accelerate deployment of renewable energy and to...

The Infocast Projects & Money conference each January is a good leading indicator of how strong a year it will be in terms of deal flow. If the CEOs are out in force, they have time on their hands, and it...

The British Supreme Court cleared the way in mid-January for companies that have suffered economic losses due to COVID-19 to collect on business interruption insurance policies.

Tapping equity in the London market

London listings are being used by some investment managers to raise capital to invest in US renewable energy assets.

Care must be taken in cases where pension funds invest directly in US renewable energy projects to avoid turning the projects into “plan assets.”

As President Biden’s appointees take their places and his nominees move through the Senate approval process, this is how the roster of key players on federal environmental and climate policy has shaped up.

Clean energy bill next up

Clean energy and infrastructure will take center stage after the US Congress clears a $1.9 trillion COVID relief bill. The COVID bill is expected to move through Congress by March 15.

Spiraling shipping costs and container shortages threaten to delay construction and increase project costs. Shipping costs to move goods from Asia to the US West Coast were up 190% year on year through Decembe

Uighur issues are starting to play a role in financings. The New York Times reported on January 9 about the possibility that Uighur labor is being used to make polysilicon or solar panels made by five Chinese

Pension plans may soon find it easier to make ESG investments. After only several hours in office, the Biden administration took steps to roll back recent Trump administration limits on environmental, social

Battery manufacturer SK Innovation will be barred from importing battery components for 10 years under a US International Trade Commission decision in early February.

Tax insurance premiums may not be deductible. The IRS disallowed deductions claimed by two partnerships on grounds that the insurance was not closely enough related to each

Storage is expected to account for 11% of new capacity additions this year in the United States, reflecting a rapid rise.

California wind and solar projects were ordered to cut back electricity deliveries by a little under 4% in 2020, or 1.6 million megawatt hours.

Fewer corporate PPAs were signed in the United States in 2020 compared to 2019 after three straight years of increases, as COVID and other factors took a toll.

As frustrating as trying to get a COVID vaccine

Callers to the Internal Revenue Service with tax questions have roughly only a one in 11 chance of getting through currently, according to the IRS.