The market is showing early signs of a stampede to install carbon capture equipment at power plants and industrial facilities with significant carbon footprints to qualify for federal tax credits.

Some tax equity investors are circling possible carbon sequestration transactions with the aim of closing their first such transactions this year.

The US government offers a tax credit for capturing carbon emissions at industrial facilities and then doing one of three things with them. The tax credit is found in section 45Q of the US tax code.

There are deadlines to do certain things.

The tax credit amount and how long the tax credits run depend on when and how these items fall into place.

The US has 13 commercial-scale carbon capture facilities currently in operation with the capacity to capture 25 million metric tons of CO2 a year. More than 30 new projects have been announced since Congress revamped the tax credit in early 2018.

The IRS has disallowed more than half the tax credits claimed to date. The main reason is taxpayers have not been complying with the US Environmental Protection Agency requirements for monitoring, reporting and verification of the carbon emissions captured.

The emissions must be from a factory, refinery, power plant or other fuel combustion source, fuel cell, pipeline or manufacturing process. If the carbon dioxide is underground, drawing it out counts as long as the commercial goal is to recover some other gas mixed with it.

The facility that is the source of carbon emissions can already exist or it can be new, but any new facility must be under construction by the end of 2025. The industrial facility must normally be completed within six years after the year construction starts.

The carbon capture equipment must also already be in place or be under construction by December 2025 or have been part of the original planning and design for the industrial facility.

The captured carbon emissions must be emissions that “would otherwise be released into the atmosphere as industrial emission[s] of greenhouse gas or lead to such release,” according to the statute authorizing tax credits to be claimed. The captured emissions can be any form of carbon oxide. Although the rest of this article uses CO2 as shorthand when describing the emissions, both carbon monoxide and carbon dioxide emissions qualify.

The volume of CO2 from the emissions source each year must reach certain thresholds.

If 500,000 or fewer metric tons of CO2 are captured in a year from the emissions source, then at least 25,000 metric tons of CO2 captured that year must be put to a permitted commercial use as opposed to be being buried underground or used for enhanced oil or gas recovery.

Any power plant that does not put at least 25,000 metric tons of captured CO2 in a year to such a permitted commercial use must capture 500,000 or more metric tons of CO2 a year to qualify for tax credits.

One of three things must be done with the CO2 after it is captured.

The person capturing the CO2 can dispose of it or contract with someone else to dispose of it underground in secure geological storage. It can use the CO2 or arrange for someone else to use the CO2 as a tertiary injectant for enhanced oil or gas recovery followed by disposal in secure geological storage. Alternatively, it can put the CO2 to a permitted commercial use.

The CO2 can be affixed to something else through photosynthesis or chemosynthesis, such as using it to grow algae or bacteria. It can be converted chemically into a material or compound in which the CO2 is securely stored. It can be used for some other purpose for which a commercial market exists.

Anyone putting CO2 to commercial use must do a lifecycle analysis.

The amount of CO2 considered put to commercial use cannot exceed the CO2 captured at the emissions source. It may be less. Direct and significant indirect uncaptured emissions during the full product lifecycle from production of raw inputs to delivery of the product to consumers must be subtracted. IRS regulations say that one of the lifecycle effects that must be taken into account as a potentially significant indirect effect is land use changes.

Section 45Q tax credits have been available since 2008, but they could only be claimed

In February 2018, Congress rewrote the statute to drop the cap, increase the credit amount, and allow tax credits to be claimed for 12 years after the capture equipment is first placed in service. (For earlier coverage, see “Tax Equity and Carbon Sequestration Credits” in the April 2018 NewsWire.)

An election can be made to claim tax credits on carbon capture equipment that was already in service in February 2018 under the new regime.

The following table shows the tax credit that can be claimed per metric ton of CO2 captured at a qualified emissions source and put to a permitted use.

After 2026, the amounts are adjusted for inflation as measured by the GNP implicit price deflator published by the US Department of Commerce.

A separate election can be made to treat older equipment as originally put in service on February 9, 2018 to allow a later start for the 12-year tax credit period, but only at facilities where at least 500,000 tons of CO2 a year are being captured. However, the election cannot be made if tax credits were claimed by anyone on CO2 captured at the facility before February 9, 2018.

Another way to buy more time is to make such extensive upgrades to the capture equipment that it is considered brand new. This starts a new 12-year period to run on the tax credits.

If tax credits are claimed for several years after February 9, 2018 on CO2 captured using older capture equipment that was already in place in 2018, and such extensive improvements are made in 2025 that the capture equipment is considered new, then another 12 years will start to run on tax credits in 2025.

The tax credits belong to the person who owns the carbon capture equipment and disposes of the CO2 or contracts with someone else to do so.

The owner of the carbon capture equipment can transfer the tax credits to the company that disposes of the CO2 in secure geological storage, uses it as a tertiary injectant for enhanced oil or gas recovery or uses the CO2 in a permitted commercial use.

The IRS says it is all of the equipment used to separate or capture, treat, process, dry, liquefy, pump or compress the CO2 up to the point where it is transported for disposal. The carbon capture equipment includes gathering and distribution lines that bring the captured CO2 to a central point of collection before the CO2 is transported, but it does not include the pipeline that transports the CO2.

There are multiple ways to structure a tax equity deal, but partnership flip structures are expected to be the most common.

The IRS issued guidelines for carbon capture tax equity transactions that are structured as partnership flips. These guidelines can be found in Revenue Procedure 2020-12.

In a partnership flip, the owner of the industrial facility forms a partnership with a tax equity investor to own the capture equipment. Tax credits must be shared by partners in the same ratio they share in income or loss, depending on whether the partnership is expected to generate cash flow. 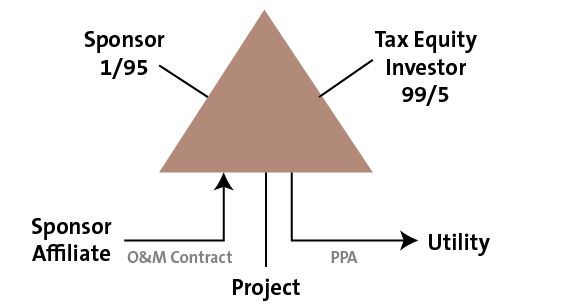 Less than 50% of the tax equity investment can be made on a “pay-go” basis, meaning over time as tax credits are allocated. Ongoing capital contributions to cover operating costs, like payments to a disposal company to dispose of the CO2 in secure geological storage, site lease rents, taxes and insurance, are not considered pay-go payments for purposes of the cap.

The investor must make at least 20% of its total investment when it acquires its partnership interest.

Any tax equity deal could also be structured as a sale-leaseback where the capture equipment is sold to a tax equity investor and leased back. The lease would have to require the lessee to dispose of the CO2 captured. One of several challenges with a lease structure is fluctuating rents present issues, although there is precedent in shopping center and similar commercial property leases for the lessor to take a fixed percentage of gross sales revenue as rent.

The tax equity investor could also be a partner in a disposal partnership to which the capture equipment owner has elected to transfer the tax credits.

Some tax equity investors are using “tax event” clauses copied from refined coal deals where they will stop making capital contributions after an adverse audit adjustment or change in tax law that reduces the tax credits by more than 35%. They are also reserving the right to defer installment payments or capital contributions in up to a fixed number of quarters when the CO2 captured does not justify the full contribution.

The tax credits claimed will be recaptured to the extent the CO2 leaks from underground storage, including after use as a tertiary injectant for enhanced oil or gas recovery. Any tax credits recaptured must be repaid to the US Treasury

The IRS will look back three years. It assumes that once CO2 has remained underground for at least that period, it is likely to remain underground.

Thus, the total period when the tax equity investor claiming tax credits is exposed to some level of recapture runs potentially for 15 years: the 12-year tax credit period plus three years thereafter.

Only the net leak in a year is recaptured, meaning the leak after offsetting the CO2 injected into the ground that year.

If multiple taxpayers are storing in the same underground reservoir, then they will have to come up with a method to allocate the leaked CO2 among them. Leaks triggered by a volcano, earthquake (but not seismic activity caused by CO2 injection), pandemic, war, terrorist attack or government action do not trigger recapture.

Carbon capture may not be economic at some facilities with large carbon footprints. For example, capture equipment and most compressors require electricity to operate. This increases the parasitic load at a power plant and may affect the economics of continuing to run the power plant. If the captured CO2 is not relatively clean, larger compressors will be needed to compress a much larger volume of gas and the capital and operating costs may be prohibitive.

The potential environmental liabilities involved may make tax equity investors unwilling to be on the disposal side of the transaction.

Minimum emissions levels required to qualify for tax credits may not be reached in a year. There is a risk that coal-fired power plants will shut down before the 12 years have run on tax credits.