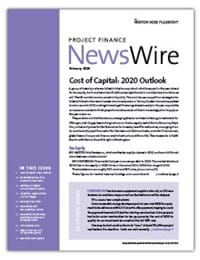 A group of industry veterans talked in late January about what to expect in the year ahead for tax equity, bank and term loan B debt and project bonds in a widely heard conference call.

Expanded reviews of US in-bound investments

The US government will vet more foreign investments in US companies and assets starting February 13.

Quasi-merchant projects that sell into the spot electricity market and use hedges to put a floor under the electricity price are becoming more common, particularly in ERCOT where power purchase agreements...

Colombia is expected launch a third renewable energy auction in 2020.

A group of investors and the CEO of one of the most successful independent power companies had a wide-ranging discussion about the state of the market and where they see opportunities.

The Federal Energy Regulatory Commission is likely to hold a rehearing of its controversial decision in late December to require renewable energy and nuclear generators bidding into PJM capacity auctions...

A US appeals court made it easier in December for long-term power purchase agreements that independent generators sign with utilities to be set aside in utility bankruptcies.

BlackRock, the world’s largest asset manager with $6.8 trillion in assets under management, declared in January that “climate risk is investment risk” and announced that sustainability...

Coronavirus: Effect on US wind and solar projects

Coronavirus has led some equipment suppliers who rely on Chinese factories to send force majeure notices that deliveries will be delayed.

The Trump budget delivered to Congress on February 10 would scale back tax incentives for renewable energy.

Tax contest rights could be eviscerated if the US government wins a motion it filed in late January in the Alta Wind case.

The US reversed course and increased tax credits for new wind projects that start construction in 2020 compared to 2019.

Eight tax equity investors in the DC Solar deals filed suit in December against the law firms that wrote opinions as well as the accounting firms, appraisers and brokers involved in them.

H-S-R thresholds for notifying the US government of planned acquisitions have been updated.

Offshore vessels and US taxes

Offshore vessels generate income that will be taxed in the United States if the vessels help with oil and gas or recovery of other natural resources on the US outer continental shelf.

The Foreign Corrupt Practices Act can be used to prosecute a foreigner who pays a bribe to win a contract outside the United States if the US government can show he is acting as an agent for a US company.

The United States allows US companies that pay income taxes to other countries on foreign earnings to credit the taxes paid against any US taxes that must be paid on the same income.