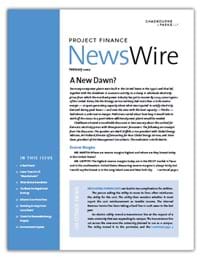 Too many new power plants were built in the United States in the 1990’s and that led, together with the slowdown in economic activity, to a slump in wholesale electricity prices from which the mer...

Lower taxes for US “manufacturers”

The Internal Revenue Service answered questions in late January about a new law that will let companies pay taxes at a lower rate on income from “manufacturing” in ...

In an otherwise soft project finance market, windpower deals are a bright spot. More than 180 people attended a roundtable discussion that Chadbourne hosted in mid-January in Houston ...

The US government is hoping that US companies will bring back billions of dollars this year from overseas to take advantage of a special ...

Ethanol plants are another bright spot in an otherwise weak project finance market ...

Equity participants in the leveraged-lease market are agonizing over whether they have to rerun earnings from a variety of highly-structured equipment lease transactions that were done in the last ...

Project developers using nascent renewable energy technologies in the United States may qualify for grants from the US government...

With the Kyoto protocol on climate change scheduled to enter into force on February 16, 2005, the jockeying for the post-2012 round of emission reductions has already started.

Relocating power lines can lead to tax complications for utilities. The person asking the utility to move its lines often reimburses the utility for the cost ...

Undivided interest structures may be taxed differently by US states than by the federal government...

An earnings stripping strategy for British companies with US subsidiaries is under attack in the pages of Tax Notes magazine. The magazine is popular with policymakers in Washington...

Brazil moved in December to tax foreigners on gains in the value of shares in their Brazilian subsidiaries caused by fluctuating exchange rates.

Mexico has started collecting a 25% withholding tax on certain payments by Mexican companies to foreigners.

Out-of-state limited partners may be taxed on their partnership incomes, even if they have no other ties to a state ...

West Virginia has been collecting too much in severance taxes from some coal producers, the state’s highest court said.

Communications excise taxes may not apply to yet another type of phone service. The US government collects a 3% excise tax on “amounts paid for communications services...

Telephone companies provide a service rather than sell a product, a Kansas court said.

Mauritius continues to receive barbs from the Indian government for its favorable tax treaty.

Kazakhstan adopted a 10-year income tax holiday in December for new business ventures undertaking projects in parts of the country where the government would like to encourage economic development ...

Montana is moving to reduce property taxes on wind farms.