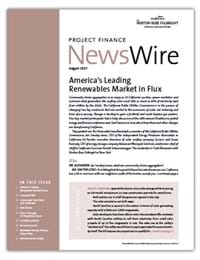 Community choice aggregators in as many as 23 California counties{comma} power marketers and customer-sited generation like rooftop solar could take as much as 85% of...

Corporate PPAs were down almost half from forecasts and down almost a third from the year before.

A panel of veteran investment bankers and one commercial banker had a wide-ranging discussion at the Chadbourne global energy and finance conference in...

Battery storage is the sexy newcomer to the rooftop solar industry. Technology has rapidly improved{comma} while prices consistently decline.

What to make of the growing interest in US offshore wind projects given the conventional wisdom that offshore wind cannot compete in a...

Solar electricity is expected to be the cheapest generating source by the middle of the next decade.

The US Environmental Protection Agency has decided to move forward with plans to designate which cities and counties are in compliance with new federal ozone limits...

Pennsylvania is proposing to tax virtual electricity trades across the PJM grid.

New corporate PPAs signed through June 15 reached 1{comma}240 megawatts{comma} a little ahead of the pace in...

Tax credits may be in play in any tax bill taken up by Congress this fall.

US Bank regulators may roll back part of regulations put in place to implement the Volcker rule.

California will not collect sales and use taxes on equipment bought after this year for use in electricity generation storage ...

Sale of a service contract produced capital gain rather than ordinary income ...

US taxes when foreign investors exit

A foreign partner in a US mining business did not have to pay US taxes on most of its gain when it sold its ...

Two US Tax regulations that affect the project finance market are in limbo.

The Solar Energy Industries Association estimates that the solar tariffs sought by US solar panel manufacturer Suniva would cost the United States 88,000 jobs .