What should one make of the dip in number of new power purchase agreements signed in 2016 to sell electricity directly to large corporate buyers? Corporate PPAs were down almost half from forecasts and down almost a third from the year before. Duncan McIntyre, president of Altenex LLC, which matches independent power producers with corporate buyers, answered the question at the Chadbourne global energy and finance conference in early June.

Let me take you on a very quick tour of the corporate power purchase agreement market in the United States, starting with some high-level reasons why corporations enter into such contracts.

There are two primary motivations.

The second motivation is the economic tool that a corporate PPA provides. Twenty years ago, power markets were more stable. A big corporation arguably had fewer decisions to make. Regulated utilities provided pretty reliable and fairly cheap power. Today, there is more volatility to the energy supply. Companies are more interested in managing how power is procured and brought into the organization.

I want to focus on that second point, which is managing economic risk.

When you think about risk from the standpoint of cash flow, a treasury organization will focus on a handful of things. Foreign exchange and interest rates are two items that have, for a long time, been part of a treasury organization’s key areas of focus. Energy prices over the last decade, in certain deregulated markets, have been more volatile than these two items that treasurers fear put cash flow at risk. Energy managers and chief financial officers did not talk much about them in the past, but they are talking more today. The box below shows the volatility of foreign exchange interest rates and electricity, expressed in terms of relative standard deviation from a mean, over the last 10 years.

The bar graph farther down this page shows the volume of corporate PPAs signed in each of the last six years. The peak was in 2015, with a little over 3,000 megawatts of corporate PPAs signed. There were a little over 2,000 megawatts of new corporate PPAs in 2016. The early adopters were signing PPAs in 2010 and 2011. Sustainability-minded businesses like Google mobilized. They hired energy managers. They hired consultants, and they began to look at the concept of how they could procure renewable energy for their operations. They decided there was an economic benefit from locking in a fixed price for energy.

The lines on the same graph show energy prices in key wholesale markets, like Henry Hub, ERCOT, PJM and SPP. These are some of the wholesale markets where renewable PPAs are getting traction. You can see how volatility can be perceived as risk. We were in a bit of a sweet spot for corporate PPAs in 2014 going into 2015. The volatility during this period represented risk. A wave of sustainability was taking hold in corporate America. Production tax credits for wind farms were about to expire.

The threat that the tax credits would expire led to a bit of a rush in 2015 to complete transactions. In 2016, the market failed to meet growth expectations.

First, the value proposition for the buyer around risk management broke down. Natural gas prices hit a 20- or 25-year low in May going into the early summer.

The volume of new corporate PPAs signed in 2016 was lower than the year before, but the drop was not as dramatic as the drop in energy prices. Companies being offered fixed prices under long-term contracts were looking at long-term forward price curves that ranged from flat into the future to slightly up. 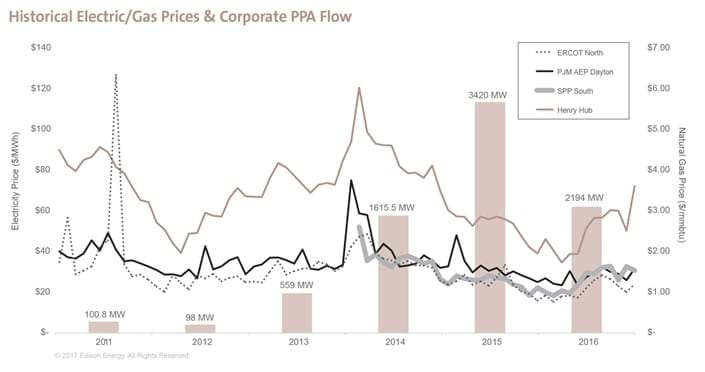 Every company has a different perception about where energy prices are headed in the future. However, the economic value of a long-term PPA was less attractive at the beginning of 2016 than it was in earlier years.

Fast forward to today. We think 2017 will be a growth year, bigger than 2016. What will the number be? We don’t know. We think the sustainability trend is alive and well. The number of companies, states, cities and universities that signed up to comply with the Paris agreement is pretty dramatic. Almost 100 corporations have signed up to go to 100% renewable energy at some point in the future.

Corporate mobilization is on the upswing. Not all companies will do PPAs. Some of them find that the term, size and some of the associated risks are not right for them. But most companies will engage in some manner, whether it is signing a utility-scale PPA or participating in a smaller community choice aggregated solar initiative.

Frankly, the market could be much larger or much smaller in the coming years depending on how gas and electricity prices move. Sustainability starts the wave, but then it becomes a matter of the perceived economic benefit of locking in a fixed price.

MR. FREEMAN: Rob Freeman from Tradewind Energy. What effect will the phasing out of production tax credits and investment tax credits have on the financial swap value of these contracts, and does it suggest the phenomenon will be a lasting one?

Something will have to replace the tax credits once they start to phase out.

In a lot of corporate PPAs, especially in PJM, the corporations are not taking any renewable energy credits to which the renewable generator is entitled. The generator keeps them and can monetize them in the market. However, something else will have to make up for the lost tax credits, either some of form of economic adder or power prices that go up a bit from where they are today.

MR. MCINTYRE: The closing-door phenomenon is not very much in evidence today. We are still seeing a wave of new companies getting mobilized for sustainability. The deals we have seen in the pipeline so far this year would represent growth from last year.

MR. HESSE: Balduin Hesse from Frontier Renewables. Basis risk is a big issue in corporate PPAs. Has there been any new innovation to address it, for example an insurance product or financial hedge? Is there a best practice? If not, are contracts for differences still the norm in this space?

MR. MCINTYRE: The industry has come a long way on basis risk. When you look at the early deals in 2010 and 2011, they were primarily bus-bar deals. For the corporate buyer, that bus-bar was usually not a good proxy for its load. Almost all the deals today are settled at a liquid hub. The generator is responsible for basis from the bus-bar to a liquid hub. For some buyers, the liquid hub is a meaningful location that the retail electricity supplier or the corporation is already using for the electricity supply.

Basis risk is managed pretty well in such cases. However, PPAs are also being done in markets where corporations do not have a retail load. Sometimes this is part of a sustainability initiative. Sometimes it is part of a deeper strategy around hedging broader exposure to long-term pricing in the United States. In those cases, there is more meaningful basis risk for the corporation.

We are hoping that the investment banks with big balance sheet can figure out a set of products, swaps or puts to help manage that risk. We have not seen a lot of corporate buyers willing to take basis risk. Where they do, particularly across markets, they charge pretty hefty premiums. To answer your question bluntly, there are not any good tools today.

MR. NEEDHAM: Rick Needham with The Rise Fund. I have one comment and then a couple questions.

Perhaps another reason for the drop is there was a big run-up to the Paris climate agreement in 2015. Some companies — Google, for example — had already gotten pretty close to 100% renewable energy through the 2015 procurement. So it may be that some of the larger buyers simply had no need for any further electricity.

Here are my questions. What is the mix of customers you see: larger or smaller, repeat versus new customers? And are there any interesting structures to pool those customers? A single customer might not be able to procure 100 megawatts. Are you pooling smaller customers to get there?

MR. MCINTYRE: We have a stable base of repeat customers, but more of the activity is from new companies entering the market. Pooling is a big unmet need in the market. The average company cannot buy 100 megawatts of power. Even Fortune 1,000 companies would prefer to have 10 megawatts here, 15 there, an appropriate mix based on local loads at multiple locations. We have come out with a product called power blocks, where we sign a PPA with partners for the full project, and then we have a warehousing period where the power can be sold down to smaller buyers.

That is one option. The way this has been done historically is advisors have grouped buyers together and tried to line up simultaneous closes. That is a clunky way to do it. It has never worked very well. I think the market would be better off if more people with big balance sheets were willing to take that market-making position. Frankly, Google could be a great company to do that. Take a position, offer it to other corporations, help make that market. The biggest issue is Google would wear some merchant risk for the period of time when there is uncertainty around whether the smaller buyers will show up at the table.