Argentina is expected to auction another round of power purchase agreements for renewable energy projects as early as July or August.

Several thousand megawatts of projects that were awarded PPAs in late 2016 are just starting to seek financing, creating something of a potential backlog. A trust arrangement, called FODER, and a World Bank guarantee that stands behind key government payment obligations and potential “put” payments by the trust are expected to be a key element in the financings.

Argentina is Latin America’s third-largest power market, with around three quarters of generating capacity owned by private companies. Its electricity demand continues to grow: forecasts suggest 6% annual increases in electricity load. Argentina’s government wants to increase the share of renewable energy to 20% of the energy mix by 2025.

Argentina is in need of additional generating capacity and new transmission lines. Low investment during the last few decades in the power sector has led to blackouts and consumption restrictions. Argentina’s grid is operating at near capacity and without a reserve margin. Energy consumption has grown while generation has remained flat.

Argentina’s power market is dominated by fossil fuels, which account for approximately 80% of its total energy mix. Argentina has had to import gas from neighboring countries.

In terms of geography, Argentina is well-positioned as one of the windiest and sunniest places in the world, with a large area of semi-desert in its north and a windy area in the south. The abundance of windy regions, high insolation and dry weather conditions are ideal for renewable energy.

The new government that took office in December 2015 has enacted a series of market-friendly reforms aimed at increasing renewable energy, promoting foreign investment and reintegrating Argentina into the global capital markets. Market reforms include eliminating foreign exchange and capital controls, unifying the exchange rate, negotiating and executing a successful agreement with holdout creditors, modernizing the import regime, reducing inflation and reforming the national statistic system. In April 2016, the government sold US$16.5 billion of dollar-denominated bonds to international investors in a single day, which marked a record for an emerging market.

Despite the promising statistics, economic and institutional challenges remain.

On the economic front, the Argentine economy grew rapidly in an inclusive manner after the 2002 crisis, with an average GDP growth of 3.5% from 2010 to 2015. This rapid growth derived from export gains, internal consumption and private investment. However, economic activity contracted by 2.3% during 2016. The GDP is expected to resume growing. The latest World Bank forecast is for 2.7% annual growth in 2017.

Inflation remains in the double digits. Argentina’s annual inflation rate is currently at about 20%, down from an estimated rate of about 40% in 2016. The central bank is targeting a 5% inflation rate three years from now.

The government implemented measures to ensure that tariffs for generation, transmission and distribution accurately reflect costs. To offset the impact of such measures on low-income energy users, the government recently introduced a new, reduced “social tariff” that entitles certain users to subsidies on the basis of income and assets owned.

There is too little transmission capacity for projects already awarded. Argentina will need to add 5,000 kilometers (3,100 miles) of transmission lines in the next three years in order to bridge the transmission infrastructure gap.

The government has put in place a string of policies to help renewable energy, including tax relief and financing incentives for private investment, RenovAR, an auction program to award power purchase agreements to renewable energy projects, and FODER, a government trust fund set up to provide payment guarantees to support all tendered PPAs and project financings. (For earlier coverage, see Argentina Launches Innovative Renewables Program in the June 2016 NewsWire.)

The government issued a new Decree 9 in January 2017 naming 2017 as the year for energy diversification through the use of renewable energy for electricity generation. Decree 9 lists the motivations: reduction of greenhouse gas emissions, creation of local jobs in construction, development, and operation and management services and a move toward greater self-sufficiency in energy supply.

The government is still studying ways to set prices, trading rules and guidelines for bilateral contracts between consumers and generators.

In the meantime, by law, all electricity consumers with loads of 300 megawatts or more can buy power directly from clean generators to meet an 8% renewables target set by Law 27,191 in December 2017. Because wind and solar power can be purchased more cheaply in the wholesale market than from national grid operator CAMMESA, consumers and generators are already preparing for a private PPA market that is expected to reach 1,000 megawatts a year.

Argentina is planning at least four energy auctions this year that are expected to attract as much as US$7 billion in investments for both conventional and renewable power plants. The country will hold two auctions for new thermal capacity, one for renewable energy and one for new transmission lines. The government is considering a possible fifth auction for thermal projects.

The renewable energy auction is expected in July or August.

Companies that won contracts to deliver electricity in earlier auctions are still seeking financing to build projects. About 3,000 megawatts of renewable power projects were auctioned in 2016. The 2017 auction has been pushed back as the winning bidders in the 2016 auction are still looking for financing. There is a concern that if Argentina holds the next auction too soon, before new projects already auctioned are structured, they might generate a bottleneck on the financing side.

Argentina has set up a system to monitor the status of the projects and government officials will meet with project developers and sponsors to help smooth out any problems they face with national and provincial government red tape.

The two auctions under the RenovAR program in 2016 were viewed as successful. Projects already awarded should bring the national renewable mix to 6% of total generating capacity. The winning projects signed 20-year PPA agreements with CAMMESA within 60 days after the contract awards. The projects must be in operation in 2018.

Argentina launched round 1.5 on heels of the announcement in October 2016 of the winning bidders in the first-round auction. Round 1.5 offered contracts for 600 megawatts of projects, divided into 400 megawatts of wind and 200 megawatts of solar. Only projects that failed to secure a PPA in the round 1.0 tender or that did not qualify for the process initially were able to take part in the additional round. Round 1.5 received bids for 2,500 megawatts. A total of 30 projects were selected in November 2016 under this additional tender, including 10 wind projects, representing 765.4 megawatts of capacity and 20 solar projects, representing 516.2 megawatts. The total capacity awarded was more than double the 600 megawatts the government had requested.

The winners of rounds 1 and 1.5 are expected to need US$4 billion in long-term debt and US$2 billion in equity.

The lowest price was US$ 46 a MWh for the Pampa wind project, a bid by Sinohydro, a Chinese state-owned hydropower engineering and construction company. The renewable energy tenders may be as much as US$10 to $20 a MwH below the prices necessary to compensate for Argentine risk, according to recent market surveys. These prices reflect the competitive participation of Chinese capital (including entities such as Envision in wind and Power China in solar) and Chinese technology in the winning bids. 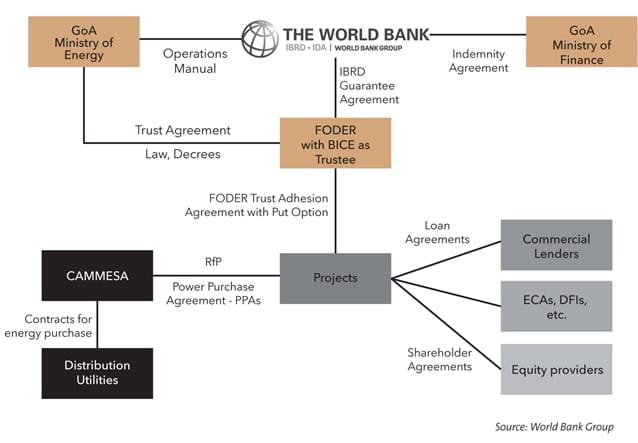 World Bank guarantees contribute to the success of the RenovAR program.

The World Bank approved US$480 million in guarantees in early March 2017 to backstop critical aspects of payment guarantees by the government to projects under PPAs awarded in the round 1 and 1.5 auctions in 2016. The World Bank estimates that its guarantee package will help leverage approximately US$3.2 billion in renewable energy financing under rounds 1 and 1.5, which is 6.7 times the amount of the guarantee itself, with a further US$2.5 billion from commercial sources.

The World Bank’s International Bank for Reconstruction and Development (IBRD) not only issues loans to governments of middle-income and creditworthy low-income countries on commercially attractive, non-concessional terms, but also provides project-based guarantees. These guarantees are issued for the benefit of specific projects in World Bank member countries seeking to attract private investment. Private investors (domestic or international), as well as sovereign, sub-sovereign and state-owned enterprises, are eligible to apply for a project-based guarantee from IBRD. IBRD considers a number of factors when determining whether a given project (public or private) is eligible for guarantee support, including, but not limited to, the project’s development impact, its ability to attract private loans or equity investment, and the project’s technical and financial viability and sustainability in the short, medium and long terms. (For additional information, see Guarantees for Investments in Emerging Markets in the August 2016 NewsWire.)

The IBRD will backstop certain “put option” payments that the FODER trust might have to make. A project can be put to the trust after any of five events of default: extended default by the offtaker under the PPA, inconvertibility of the Argentine peso, transfer restrictions, material adverse changes to FODER’s operations without the sub-project’s prior consent, and non-compliance with an arbitral award or judgment.

FODER’s “put option” payments are a type of termination coverage available to investors that entitles them to sell their projects to the FODER trust if certain macroeconomic or sector-specific risks materialize. The five events of default are an example.