Prices for greenhouse gas emission allowances under the California cap-and-trade program are likely to remain low for the foreseeable future.

Legal and regulatory uncertainties cast a shadow over the future of the program. There are also too many allowances on the market in relation to demand.

The steep drop in auction trading volume in May should not be taken as an extreme loss of confidence in the cap-and-trade program. Rather, some of the lost trading volume has shifted from the state auction to the secondary market, where allowances are trading at prices below the reserve price. Other volume can be made up without penalty in subsequent auctions or market purchases before the end of the 2015-2017 compliance period.

The drop in allowances prices is a more meaningful indicator of market conditions. Even if legal uncertainties are cleared up and the future direction of the program is clarified, auction and secondary market prices are likely to remain near the auction reserve price until allowance surpluses are permanently removed from the market, which will probably not be before January 2018 at the earliest.

How the program works

The California Air Resources Board (CARB) officially launched the cap-and-trade program in 2012, with mandatory compliance obligations beginning in 2013. The program establishes an annual cap on California greenhouse gas emissions so as to reduce emissions to 1990 levels by 2020, and below this amount in subsequent years. Entities covered by the program include electric utilities with retail loads, large industrial energy users, and, as of 2015, natural gas suppliers. Covered entities must submit an allowance to CARB for each equivalent metric ton of CO2 that they emit. The number of allowances available each year is equal to the number of metric tons of emissions that is allowed under that year’s cap.

Certain covered entities receive free allowances from the state to cover a share of their emissions. For the electric utility sector, the amount of these free allowances was set to exceed the number of allowances the utilities are expected to need, in recognition that utility customers have been paying for greenhouse gas emission reductions, such as through the procurement of renewable resources and energy efficiency, since before the start of the cap-and-trade program. Entities receiving extra free allowances or that can reduce their emissions below their allowance allocations can sell their surplus. Covered entities who do not receive allowances from the state or whose emissions exceed the allowances they are issued must buy allowances in the market. Entities without compliance obligations may also participate in the program by voluntarily reducing their own emissions or by trading allowances as a liquidity provider.

California cap-and-trade allowances may be traded through two markets or bilaterally. 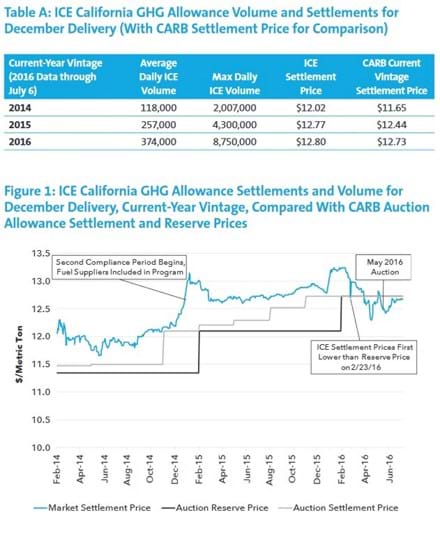 The first market is the allowance auction held by CARB each calendar quarter. In these auctions, allowances issued by CARB and by the Quebec government, which is working jointly with California to reduce emissions, along with allowances consigned to the auction for sale by covered entities, are sold at the auction settlement price, which has typically been slightly higher than the auction reserve price.

The second market for California allowances is the Intercontinental Exchange (ICE) trading market. This secondary trading market settles daily. Until recently, allowance prices in the secondary market have usually been higher than CARB auction settlement prices.

CARB has held quarterly auctions of allowances since November 2012. Each auction after 2012 has been of allowances for both the current-year vintage, meaning allowances that can be used to meet compliance obligations in the year they are auctioned, and for a vintage three years ahead.

Meanwhile, average daily trading volumes on the secondary market for the December delivery product have more than doubled since 2014 and have increased by more than 45% between 2015 and 2016. (The December delivery products are allowances that would be physically delivered to the buyer in December. ICE allows trading for products with different delivery months as well, but the December contracts are the most consistently traded.)

With the first drop in ICE prices below the auction reserve price, trading volumes on the secondary market spiked as shown in Figure 2. However, since that time, ICE volumes have not returned to anywhere near the February peak and, since March, have generally been below the 12-month rolling average.

The dynamics in the current market appear to be driven by two factors: general uncertainty about the program and the future value of allowances, and a likely surplus of emission allowances on the market.

The primary uncertainty over the future of the cap-and-trade program stems from a lawsuit currently before a US appeals court in California that challenges the validity of the program. If the court invalidates the program, then compliance obligations could disappear and allowances could lose all their value. An April court order requesting supplemental briefs was interpreted by some analysts as a negative indicator for the program, potentially adding to the concern about possible program invalidation and contributing to the drop in allowance prices.

Trading prices may also be influenced by factors outside of California. Notably, the US Energy Information Administration linked a drop in prices of allowances in the Regional Greenhouse Gas Initiative (RGGI) market, in which eight states in the mid-Atlantic and New England participate, to a decision by the US Supreme Court in February 2016 to suspend enforcement of the Clean Power Plan, the federal plan for reducing carbon emissions from US power plants. Shortly after this Supreme Court decision, secondary market prices in California fell below the CARB auction reserve price for the first time.

There are additional uncertainties about the value of allowances in the post-2020 period. Primary among these factors is the lack of program regulations for this period, including regulations determining how allowance reserve prices will be set and how many allowances will be available for sale. 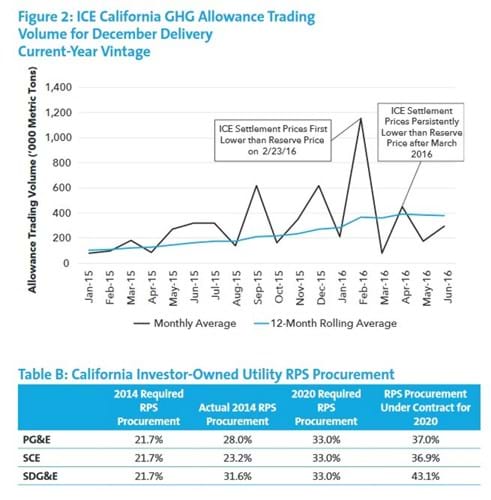 There is also uncertainty about how plans to expand the reach of California Independent System Operator to cover sections of the power grid in other western states will affect demand for allowances.

Another factor contributing to a collapse in prices is a surplus of allowances on the market. Data from CARB indicate that more than 30 million allowances of 2013 and 2014 vintage remain available for meeting current and future compliance obligations. This surplus can be traced at least in part to lower-than-expected load growth and higher-than-expected renewable energy generation in the electric utility sector, which appears to have resulted in a lower need for allowances than was anticipated when CARB allocated free allowances to the sector.

As shown in Figure 3, electricity sales in 2013 through 2015 did not increase as expected, but remained relatively flat and are now expected to grow much more slowly than was expected when the cap-and-trade program was under development in 2012.

Furthermore, utility procurement of renewable energy has increased much faster than expected as a percentage of annual electricity sales and, based on current utility contracts, is expected to far exceed the required 33% renewable portfolio standard by 2020, as shown in Table B below. This over-procurement stems from lower-than-expected sales and from improvements in the utilities’ renewable power contracting practices that have reduced contract failure rates, leaving the utilities with a larger amount of renewable energy deliveries than they had planned.

Lower sales and a higher share of renewable power each reduce the amount of fossil-fueled electricity that the utilities need to meet their loads. This, in turn, should reduce the need to run less efficient fossil-fueled power plants that have higher heat rates and higher emission rates, which are generally used when demand is highest. Running these less efficient plants less of the time further reduces utility-sector greenhouse gas emissions.

Even considering the need for additional natural gas generation in recent years due to the retirement of the SONGS nuclear power plant in southern California and the depressed availability of hydroelectric generation (due to drought conditions), the overall need for greenhouse gas emitting fossil-fueled power in California appears to be lower than was expected when the cap-and-trade program was being developed. This is probably a key factor behind the allowance surplus.

The cap-and-trade program was designed to address such a situation through an auction price stabilizing mechanism. Under this mechanism, allowances that are designated for auction by CARB or Quebec, but are not sold, are withheld from future auctions until settlement prices in two consecutive auctions fall above the auction reserve price. This mechanism will reduce the allowance surplus at least for the remaining two 2016 auctions, which should help to stabilize prices in both the auctions and the secondary markets.

However, once the clearing price in the CARB auction rises above the reserve price for two auctions, then the allowances that were removed from earlier auctions will re-enter the auction.

When this happens, the CARB auctions will face a new allowance surplus that will again put downward pressure on prices. These re-auctioned allowances cannot exceed 25% of allowances previously designated by regulators for that auction, so the impact of this mechanism may be spread over several auctions.

Since 2017 is the last year of the second compliance period, the situation will be different next year in that all allowances for the 2015-2017 compliance period must be met by allowances of vintage 2017 or previous vintages. As a result, there could be short-term price increases during the final opportunities to meet the 2015-2017 compliance obligations, particularly if entities defer large allowance purchases until 2017 and also if traders withhold allowances from the market in anticipation of higher prices in the future. Even if this were to occur, these price increases would probably be followed by a drop in price at the start of the 2018-2020 compliance period (when allowance purchases could again largely be deferred until 2020), and prices can overall be expected to remain near the reserve price unless something fundamental changes in the market to eliminate the surplus allowances. 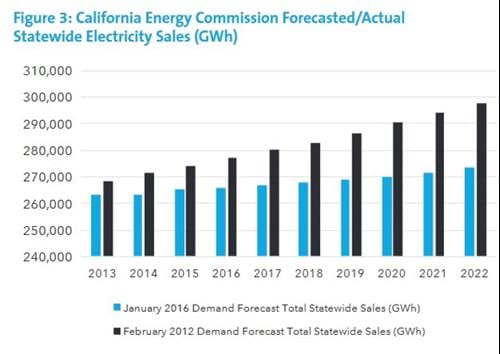 It is reasonable to expect allowance prices generally to remain near the reserve level until CARB’s proposal for permanently retiring unsold allowances is implemented or another solution is found. As with CARB’s proposal for permanent allowance retirement, other solutions, such as setting the post-2020 allowance levels so as to remove the surplus, are likely to be designed so as to keep enough allowances in the market to avoid a price spike. As a result, barring unforeseen circumstances and with the possible exception of short-term spikes, the market recovery is likely to be gradual.

Price levels will also be influenced by developments in the legal proceedings concerning the California cap-and-trade program and possibly also the Clean Power Plan. California’s post-2020 cap-and-trade regulations and implementation of the cap-and-trade program within the context of a regional power market as the California ISO expands will primarily influence longer-term pricing. However, given that allowances may be banked for long-term use, developments in these areas may also inform pricing in the near-term to some extent.