by Arnold Leitner, with YouSolar outside San Francisco

Adding batteries to solar rooftop installations will lead to a fundamental change in power markets.

The levelized cost of energy produced by solar rooftop systems with batteries in Germany is expected to fall below the retail price of electricity purchased from the grid by the end of 2015. In the US, such systems are already competitive in Hawaii and should become competitive in other US states by 2020. These systems are also already cheaper than small diesel generators everywhere today.

This article uses the term “solar-battery systems” to refer to batteries that are located at the customer site and are thought of as being “behind the meter,” meaning they generally do not provide power back to the utility through net metering where the utility meter runs backwards as the utility customer feeds any extra electricity it produces back into the grid. However, customers with such systems typically purchase some power from the utility to achieve full reliability.

In addition to a PV array and a battery, these systems also include an inverter, controls and other power electronics. Their sizes are from one to tens of kilowatts and target residential and small commercial customers.

These solar-battery systems use local solar energy as the primary energy source and supplement energy from a traditional utility connection. The battery of the system fulfills two functions. First, it stores excess solar energy that cannot be used directly by the customer for use at a later time. Second, the battery is able to meet all of the instantaneous power needs of a homeowner or small business. Such a solar-battery system can be controlled by energy management systems that aim to meet certain performance targets and may rely on learning to forecast demand. The solar-battery system is effectively a private utility.

Exhibit 1 below shows a schematic of a solar-battery system that is behind a meter. 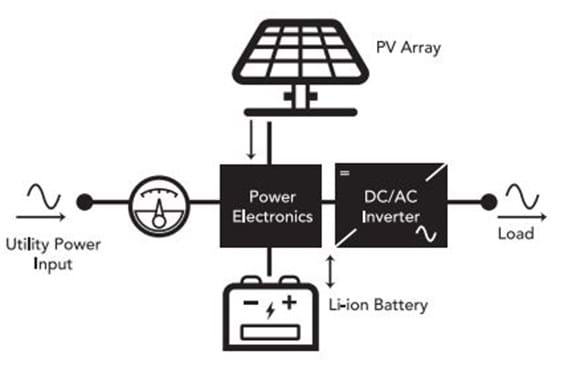 Net metered solar systems use the utility as a “battery.” The utility system is not designed for this function and providing this service is not cheap. In a net metering scheme with a tariff, the economics for the customer are also poor, since he transfers electricity to the utility during off-peak hours in the middle of the day and buys back at peak rates in the evening.

The utility provides power to the customer of a net-metered solar system to help the customer meet its peak load. This is needed because a solar system sized to generate energy equal to the customer’s load during a year — for example, a “net-zero” home — still does not produce enough power, even at maximum sunshine, to meet daily peak demands.

Take the example of a net-zero home with a 12.5-KW DC solar system with a production factor of 1,600 KWh AC for each kilowatt of DC capacity, which produces the home’s annual demand of 20,000 KWh, or an average of 1,670 KWh per month.

Assuming a de-rate — or power loss to convert the electricity from direct current to alternating current so that it can be used in a house or other building — of 80%, such a system has a maximum output from the inverter of 10 KW AC. This is much less than the up to 40 KW of peak demand that such a home can have. These peak levels are not rare events; a home hits these peak values almost daily. Even during the sunniest hour of the day, the solar system cannot deliver enough power to meet these peak demands. Thus, the utility must act as a power “booster.” This is an essential service as otherwise the inverter would shut down due to overload or electric appliances could sustain damage as the voltage and frequency in the home circuits sag.

Exhibit 2 shows the instantaneous demand of a home for a typical summer day. 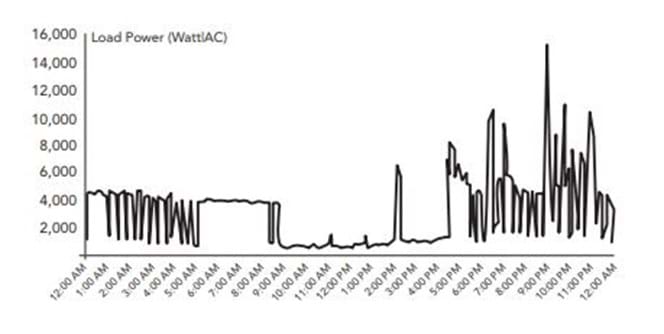 A solar-battery system is different from a net-metered solar system as it stores excess solar energy in its battery and is able to meet all the peak power needs of the customer.

In a net-zero net-metered home, about 35% to 40% of the solar energy is used directly by the home, and 60% to 65% is sent to and later repurchased from the utility. These percentages can vary from home to home, but the fact that there is a split is pretty universal as it reflects the typical electric consumption pattern of a home: some morning demand, little demand during the day, and then high demand after work and into the night versus the output of the solar system during the day, which has the shape of an inverted parabola.

Using a battery in the home increases the percentage of the solar energy produced that the customer uses himself. A self use of 75% is achievable for a net-zero home with a battery that is sized to hold about two hours of maximum solar production. For higher self-use percentages, the levelized cost of energy for a solar-battery system increases quickly. Customer behavior like running a dishwasher or washing machine during the daytime can increase the self-use percentage to 85%.

The solar-battery system used for purposes of illustration earlier has a lithium ion battery with 20 KWh of useable capacity and a gross capacity of 28 KWh. As can be seen in Exhibit 2, the peak demands for that day are between four and 10 KW, with one spike to 15.5 KW.

These power levels are no challenge for a 20 KWh net and 28 KWh gross battery that can discharge easily at 50 KW. The maximum discharge rate is three times higher than the highest load in the day shown in Exhibit 2 and well within the battery specifications.

There is no need for the utility to boost the system’s power. In a residential application, the power demands on the battery by the loads are no problem for the battery against a storage size that is required to reach a self-use fraction of 75%. These lithium ion batteries are assumed to cycle once per day and can last 10 years or more. In contrast, automotive applications are much more demanding on discharge rates of lithium ion batteries resulting in shorter battery life.

Moving from a net-zero and net-metered solar system that needs to balance 60% to 65% of the energy with a utility to a solar-battery system that purchases (or balances) only 15% of the electricity from the utility is a significant change in the reliance on utility energy.

The performance of solar-battery systems is impressive. Lithium ion batteries enable solar PV in markets without net metering and vastly expand and deepen the penetration of solar PV in all markets.

The levelized cost of energy or “LCOE” from a solar-battery system is primarily determined by four inputs. The first two inputs are the costs of the solar array and the battery pack; these two components are the vast majority of the system cost. The third input is the battery capacity required to reach the desired self use. The fourth is the local solar production factor.

The table on the right shows the primary assumptions for calculating the LCOE of the solar-battery system used for purposes of the illustration earlier. These assumptions are valid in many markets around world.

The LCOE over 10 years is 33.6¢ per KWh. This may seem high for those of us living inside the North American natural gas bubble, but outside of it, this is a pretty competitive number, especially to customers on unreliable grids in emerging markets. These customers experience power outages that can last many hours and can occur almost daily and have to rely during grid outages on expensive diesel generators or lead-acid battery systems that store energy from the grid. And the solar-battery LCOE is only getting more competitive since the cost of solar-battery systems is on a fast downward curve, while the cost of conventional power will stay, at best, flat.

With the ability to deliver reliable and high-quality power at a cost of 34¢ per KWh, declining to 25¢ per KWh by 2020, in our estimate, solar-battery systems are competitive.

Today’s solar-battery systems give consumers the ability to have reliable, high-quality electricity no matter where they live and a choice of how they want to meet their energy needs. Customers can combat global warming with a zero-carbon “private utility” without compromising the modern lifestyle that we all aspire to or by paying a high premium. For the billions of people who do not have the privilege of our prosperous life in the United States, but who aspire to and deserve what we already have, solar-battery systems promise a cheaper and faster path to reliable power than waiting for the traditional power supply system to serve them, without adding to global warming. Solar-battery systems give emerging markets a fighting chance to avoid the dramatic increase in electricity-related carbon emissions that would otherwise be associated with fulfilling these aspirations. Generally, decentralized solar-battery systems can turn power supply systems “green” faster and more effectively than finding consensus to build a high-voltage transmission system for transporting electricity from areas with relentless wind and harsh sun, where people usually do not live, to where the customers are.

Utility power will continue to play an important role in meeting industrial demand, serving customers in densely-populated areas, or acting as an energy input to decentralized solar-battery systems. Unlike for net-metered solar systems, operating and safety concerns for the utility grid do not impede penetration of solar-battery systems that are behind the meter. These systems are also outside the influence of utilities and their regulators. Utilities will be powerless against customers of these solar-battery systems who reduce their energy needs to a small fraction, say 15%, of what they consumed before. At the same time, a market where utilities can rely on net-metered solar-battery systems for some utility system demand and supply balancing would be even more efficient. Either way, a decentralized power system will be much more resilient than what we have today.

Solar-battery systems are about to bring the biggest change to power markets since Edison, and it is already happening.