Rooftop Solar Gets Traction in China

Rooftop Solar Gets Traction in China

Distributed solar has been receiving more attention and incentives from the Chinese central and local governments in the past 18 months. However, there are still obstacles that are preventing the market from reaching its full potential.

However, scuttlebutt in the market is that this rate of growth will not be achieved.

This will require annual investment of roughly RMB 70 billion (around US$11.2 billion) during each of the three years.

China will become the biggest PV market in the next five to 10 years. For now, the Chinese distributed solar market is still at a preliminary stage compared to the European Union, the United States, Korea and Japan.

Foreign investors are starting to consider entering the market. Investors should be aware of some basic facts and issues and take steps to minimize the risks.

The State Council formally encouraged installation of distributed solar in an opinion published in July 2013. An article about the opinion is available on the Chadbourne website here. The basic principle is “generating for self consumption, connecting surplus to the grid, adjustment by the grid,” which is basically a self-consumption model. The priority is to encourage industrial and commercial entities to install distributed solar on their rooftops. The State Council is also keen to see solar panels installed on the roofs of schools, hospitals, government buildings and homes. A hundred distributed solar generation model zones will be established, 18 of which were identified by the National Development and Reform Commission in August 2013.

The National Energy Administration issued a separate set of “interim measures” to encourage distributed solar on November 13, 2013. It ordered grid companies to build the necessary upgrades to accommodate distributed solar systems on the grid.

Anyone planning to install a rooftop system must make a filing with the local energy administration. The filed project must be completed within two years after the filing date or it will not qualify for a government grant. (The grant is described later in this article.)

The procedure for connecting to the grid is more straightforward than before. The grid company must let the customer or solar company know the plan for interconnection within 30 business days after accepting the application to interconnect.

Distributed projects are exempted from the need to hold a power generation license based on a National Energy Administration notice on April 9, 2014. Before April, such projects required a license that is complicated and time-consuming to obtain.

The central government provides grants of RMB 0.42 (US$0.07) per kilowatt hour of output. The grants run for 20 years. The grid company must pay for any surplus power the owner of the rooftop solar system feeds into the grid at the local benchmark price of coal-fired power, which is around RMB 0.50 (US$0.08) depending on the location of the project and the type of customer. Thus, the customer not only avoids having to pay something like RMB 0.50 per KWh by generating his own electricity, but he also receives RMB 0.42 from the government to the extent he consumes the electricity he generates and RMB 0.92 (RMB 0.42 plus RMB 0.50) to the extent electricity is fed back into the grid.

Despite the grants, solar companies seem bewildered about how to profit from, secure land and rooftop leases for and finance distributed solar.

Local governments in nine provinces adopted incentive measures in May. The nine announced they will provide additional grants at the local level that should let solar companies and customers earn internal rates of return of 10% to 16% on the investment in the solar equipment. The additional incentives vary by province.

The term of most local grants and subsidies, except for Anhui and Jiangxi provinces, is three to five years, which is much shorter than the national grant term of 20 years.

Local governments that have not yet adopted local incentives are expected to do so as an inducement to solar companies and customers to reach local goals for new solar installations. Solar has become of major importance because it could help improve the air quality in China.

The National Energy Administration will consult with local governments later in 2014 about the goals to be set for next year. The new goals will be set in January of each year.

The distributed solar market is still struggling to find a suitable commercial model for rooftop projects.

Since there is no mature commercial model in China, first quarter 2014 installations were already behind the goals that were set at the start of 2014. In Shandong and Zhejiang provinces, both of which are key areas for distributed solar, applications were filed for only 4.15 MW and 44.8 MW of new installations in the first quarter. Most other provinces had no filings. This suggests a lack of confidence among solar companies whether they will be able to arrange financing for projects.

Recent announcements by local governments that they are adding to the subsidies is leading to greater interest in the market. Construction started in May on 50 megawatts of solar on rooftops of 130 factory buildings in a high-tech zone that the government designated as one of the 18 solar priority zones.

The biggest rooftop solar project in the country to date is a 32-MW solar installation on buildings making up a factory used by Midea Group, a leading consumer appliances and air conditioning systems manufacturer in China. The solar equipment was installed by the local utility, China Southern Power Grid, under an EPC contract with a term of 25 years.

Another challenge is how much longer the building is expected to last and, in cases where the occupant merely leases the building, how many years remain on the lease. The average building life in China is 30 years due to poor construction quality and frequent urban renewal. A rooftop distributed solar system should normally last 25 years. This may be longer than the building or lease.

The ownership of rooftops is also a complex issue. The time and expense to search ownership records and discuss with the owners and other users of the rooftops can be a major headache. Here is one place where local governments may be able to help.

Other challenges are tariff settlement and collection, quality of solar modules, and problems connecting to the grid. This has led to a wait-and-see attitude among potential investors.

Financing for distributed solar is not well developed.

Without project financing from banks or other financial institutions, the boom in distributed solar will be slow to develop. A meeting was organized recently by the National Energy Administration, the People’s Bank and the China Bank Regulatory Commission to talk about how to bridge the gap. Representatives from other major banks also attended.

The China Development Bank, as a policy bank, is the only bank that is extending credit currently to distributed solar projects. The term can be 15 years with extensions of another two to three years. The other commercial banks are still worried about potentially hidden risks in such projects.

Some insurance products related to distributed solar are under discussion and may become available later this year. These may help other banks get over their fears about the risks of lending.

China is keen to promote solar as a way to reduce air pollution.

The National Development and Reform Commission published a notice on May 18, 2014 to encourage private investors, including foreign investors, to participate in the construction and operation of 80 infrastructure projects independently or via joint venture. Thirty of the 80 infrastructure projects are for distributed solar in zones where the government has made it a priority to install solar.

The anti-dumping duties against Chinese solar modules in the United States, Europe and Australia may spur China to ramp up the domestic Chinese market for rooftop solar more quickly. 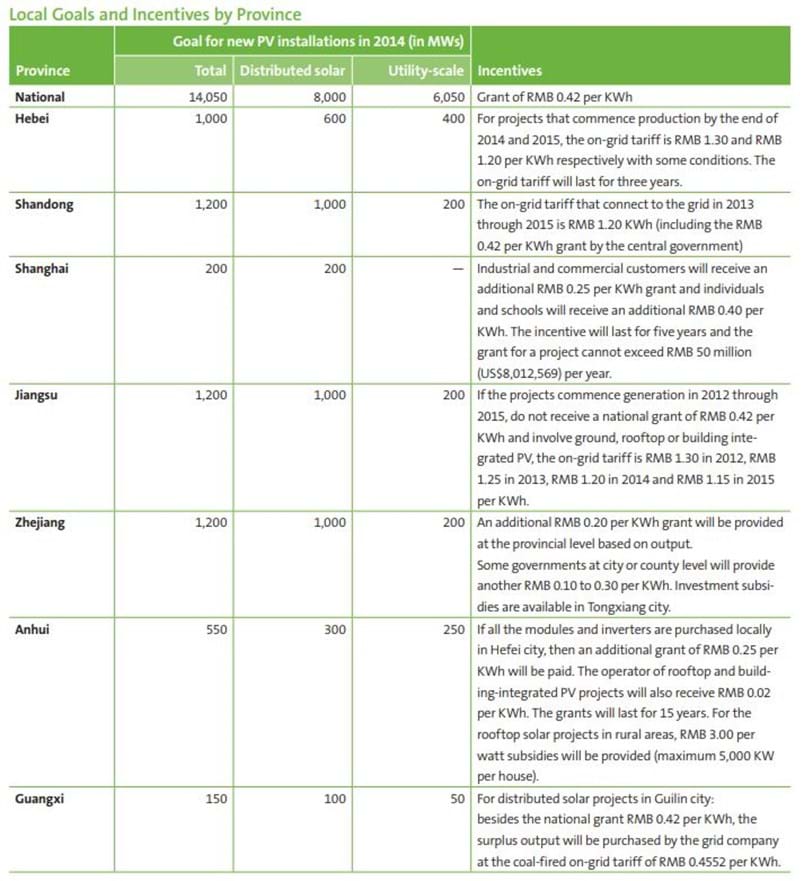 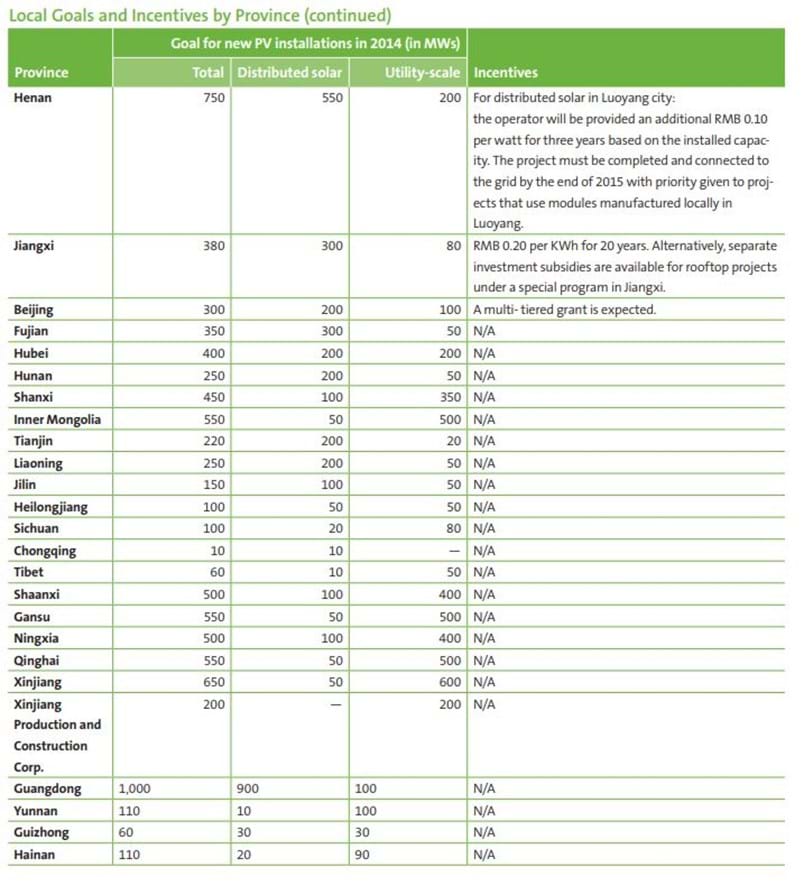