EPA proposed a similar rule setting CO2 emissions limits in 2012, but reconsidered it, in part because of more than 2.5 million comments. The 2012 proposed rule would have set a limit of 1,000 pounds of CO2 per megawatt hour emitted from new fossil-fueled power plants. EPA formally rescinded the 2012 proposal last month concurrently with its issuance of the new proposal.

The proposal does not apply to the following fossil fuel-fired electric utility steam generating units under development that are either capable of commencing construction soon or whose developers have represented that construction is already underway: Wolverine (Michigan), Washington County (Georgia) and Holcomb (Kansas). In addition, EPA’s proposal does not apply to units undergoing modifications or to reconstructed units.

Subject to these exceptions, the proposal applies to the following electric utility steam generating units and stationary combustion turbines that commence construction after the date of the publication of the proposed rule in the Federal Register.

It applies to electric utility steam generating units that burn fossil fuel for more than 10% of the heat input during any three consecutive calendar years and supply more than a third of their potential electricity output and more than 219,000 MWhs net-electric output to a utility power distribution system for sale on an annual basis.

The proposal affects stationary combustion turbines with a design heat input to the turbine engine greater than 73 megawatts (250 MMBtu/h) that burn fossil fuel for more than 10% of the heat input during any three consecutive calendar years, burn over 90% natural gas on a heat input basis on a three-year rolling average basis and were built for the purpose of supplying, and supply, a third or more of their potential electricity output and more than 219,000 MWhs net-electrical output to a utility distribution system on a three-year rolling average basis.

These sources of CO2 emissions would be required to comply with the following limits: 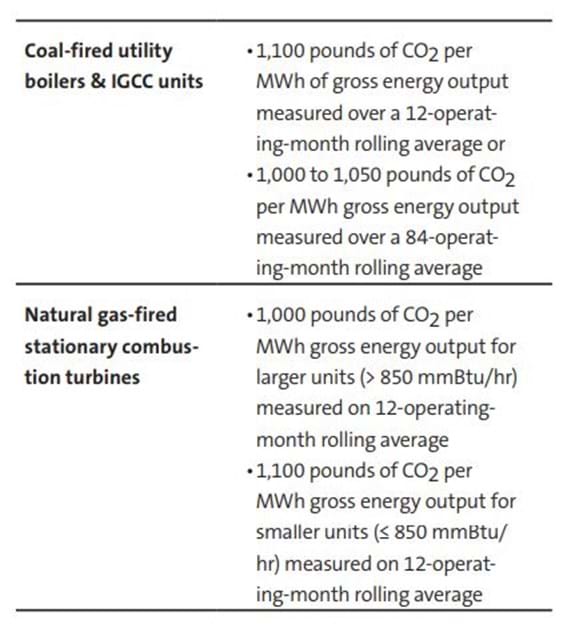 Unlike the 2012 proposal, EPA’s current proposal does not contain any specific exemptions for natural gas-fired simple-cycle units. Simple-cycle units are often used in peaking power plants because, unlike combined-cycle units, simple-cycle combustion turbines can more easily be ramped up and down. EPA acknowledged that some of these peaker units could be subject to the proposed rule, but as a practical matter, most would not be since the majority of peaker projects, by their nature, do not generally sell more than one-third of their potential electric output to the grid.

Under the proposed rule, new coal-fired and IGCC power plants could meet the CO2 limits by installing carbon capture and sequestration technology to prevent CO2 permanently from being released into the atmosphere. EPA proposes verifying that the captured CO2 is actually sequestered by adding requirements to existing greenhouse gas reporting program rules.

The proposed rule allows for some flexibility by judging coal-fired utility boiler and IGCC compliance with the rule over a seven-year time period. Under this alternative compliance plan, new coal-fired power plants could be built and come on line without carbon capture and sequestration technology if a plant commits to an enforceable limit of 1,000 to 1,050 pounds of CO2 per MWh gross averaged over a seven-year operating time frame.

EPA used its authority under Clean Air Act section 111 to issue the proposal. This section of the Clean Air Act requires that the EPA identify the best system of emissions reduction that has been “adequately demonstrated.” Critics of the proposed rule argue that carbon capture and sequestration have not been adequately demonstrated. EPA acknowledges that there are no commercial coal-fired power plants currently operating with carbon capture and sequestration technology, and instead relied on power plants that are being constructed (notably Southern Company’s Kemper facility in Mississippi that is designed to capture 65% of CO2 emissions) or developed (like the FutureGen project in Illinois with technology designed to capture more than 90% of CO2 emissions) to assert that this technology is “adequately demonstrated.” This aspect of EPA’s proposal will almost certainly be challenged in court.

The EPA does not expect a significant effect on coal-fired power plants since the low prices of natural gas have already pushed developers to favor natural gas over coal. Nevertheless, there will be significant opposition to the proposal, particularly since it is a prelude to regulating CO2 emissions from existing power plants. EPA has been directed by President Obama to propose standards, regulations or guidelines, as appropriate, for existing and modified power plants by June 1, 2014. EPA said that the standards for existing projects that will be developed “are expected to be different from, and less stringent than, the standards” proposed for new power plants and suggested that it will not require existing power plants to install carbon capture and sequestration technology.

Comments to the EPA proposal are due 60 days after publication of the proposed rule in the Federal Register.

The US Environmental Protection Agency is expected to withdraw a final rule issued in August that would have allowed the additional use of a new technical standard, ASTM E1527-13, as of November 13, 2013 to satisfy the requirement for performing “all appropriate inquiry” before purchasing real estate.

Briefly, prospective purchasers of commercial real estate are advised to perform appropriate inquiry into the current and past uses of a piece of property to qualify for certain defenses against liability under Superfund for environmental contamination that they did not cause or make worse.

The new standard revises the definition of recognized environmental conditions and requires more rigorous reviews by consultants conducting phase I environmental site assessments of agency records and an increased focus on vapor intrusion. Vapor intrusion occurs when vapors from volatile soil or groundwater pollutants migrate into indoor structures. Some suggest that the requirement to conduct more rigorous record reviews could add $400 or more to the current cost of performing a phase I environmental site assessment and potentially lengthen the time it takes to perform such an assessment.

EPA is expected to withdraw the proposal later this fall.

This was the first time in the short history of the auctions that the settlement price for the 2016 vintage allowances was higher than the auction reserve price (the minimum price at which the state was prepared to sell) of $10.71. Interest in the 2016 vintage allowances more than doubled as compared to the May auction (total qualified bids divided by allowances of 0.79 for the May auction and 1.69 for the August auction).

The 2013 vintage allowances sold at a price higher than the auction reserve price, but below the $14-a-ton price in the May auction. The drop in price appears to be because California emissions are now projected to be lower than originally expected and remain below the state’s cap through 2019.

Regulated utilities may also use emissions offsets to meet up to 8% of their compliance obligations each compliance period under the cap-and-trade program. Offset credits are created when projects reduce or remove greenhouse gas emissions and meet regulatory criteria set by the California Air Resources Board or CARB. Only CARB can issue offset credits for use in the cap-and-trade program. These credits represent verified reductions in greenhouse gases or removal enhancements from sources of greenhouse gas emissions that are not subject to a compliance obligation under the cap-and-trade program. The reductions must come from projects that were undertaken using a CARB-approved compliance offset protocol, issued by another jurisdiction whose credits California recognizes, or be sector-based offset credits issued by an approved sector-based crediting program. CARB has already approved four compliance offset protocols (US forest projects, urban forest projects, livestock projects and ozone-depleting substances) and is considering adding two more (rice cultivation and mine methane reduction).