Ethanol Loses Steam, But Only in Part

Ethanol Loses Steam, But Only in Part

December 10, 2013 | By Todd Alexander in New York and Keith Martin in Washington, DC

A proposal by the US Environmental Protection Agency in November to reduce the amount of renewable fuels that must be blended into US transportation fuels in 2014 is a blow to corn ethanol producers, but may not impede the up-and-coming cellulosic ethanol market.

This is the first time that it has proposed to set the standard below the statutorily-mandated level.

The proposed reductions are a reaction to current market conditions, the limited capacity of existing fuel infrastructure to handle blends of gasoline containing more than 10% of ethanol, and the paucity of cellulosic ethanol. At the proposed volumes, there would be a surplus of ethanol production capacity in the United States. The mandated volume would fall below the total amount of ethanol expected to be produced in 2013. In contrast to the mandate for corn ethanol, EPA has a long history of requiring high volume levels for cellulosic ethanol and then waiving non-compliance with the mandated level due to lack of supply of cellulosic ethanol.

There are 211 corn ethanol plants in operation currently in the United States with a capacity to produce a total of 14.71 billion gallons a year. The reduction in the renewable fuel standard to 13 billion gallons of corn ethanol a year will require a portion of the ethanol produced be sold for discretionary blending. This will put downward pressure on prices overall. Many of these projects have outstanding project-level debt. The industry should expect to see a further deterioration in the ability of marginal plants to service their debt service, which may continue the trend toward further consolidation of the industry.

However, the proposed fuel standards for 2014 reflect the realities of the ethanol and petroleum markets. Gasoline consumption is falling. Fuel distributors are facing an ethanol “blend wall” in the sense that they have reached the limit on the amount of ethanol they can mix at a 10% blend. There are not yet much cellulosic and advanced biofuels to blend.

Most of the debate about the “blend wall” surrounds the question of whether the transportation fuel infrastructure, both gas pumps and vehicles, can support levels of E10 (gasoline with a 10% ethanol blend) or E15 (gasoline with a 15% ethanol blend). The exact percentage level that the existing fuel infrastructure in the United States can support has been a highly debated topic in recent years.

The drop in consumer demand since 2007 has been matched by an increase in production of renewable fuels. This unanticipated inverse pattern, in combination with a fuel infrastructure not built to support more than E10, has created a marketplace that cannot currently support higher levels of ethanol adoption, whether they be derived from cellulosic sources or corn. 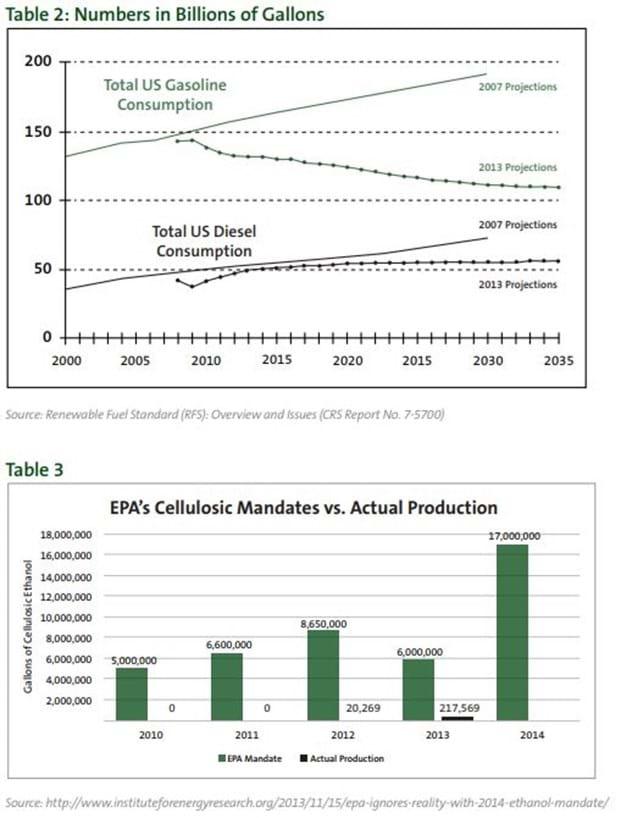 While the current marketplace may appear bleak for growth in ethanol, EPA says it is committed to promoting further growth in renewable fuels in the future. It says the reductions in mandated volumes “[are] intended to put the RFS program on a manageable trajectory while supporting continued growth in renewables over time.” Additionally, surplus ethanol production capacity in the marketplace may support growth in E85 consumption, which is gasoline that is blended with 85% ethanol and can be used by a small number of specialized hybrid vehicles.

Cellulosic ethanol is a biofuel that is produced from plant fibers in grasses, woods and other inedible parts of plants. President George W. Bush made it a goal in his State of the Union message to Congress in 2006 for the United States to produce cellulosic ethanol on a commercial scale within six years. The federal government’s commitment to cellulosic ethanol was reaffirmed by the Obama administration in 2010 when it adopted a renewable fuels standard known as RFS2 that required distributors of US transportation fuels to be mix 16 billion gallons of cellulosic ethanol annually by 2022.

The EPA proposal would reduce the required volume of cellulosic biofuels in 2014 from the statutory level of 1.75 billion gallons to 17 million gallons. Cellulosic biofuels include any renewable fuel derived of cellulose, hemicelluloses or lignin that also has a life-cycle greenhouse gas emission-reduction threshold of 60% as compared with petroleum-based motor fuels.

As an example, in 2012, the EPA mandated a volume level for cellulosic ethanol of 8.65 million gallons, but only 20,269 gallons were produced for sale. Despite the lack of supply, petroleum refiners have still been required to meet the mandated volumes of cellulosic ethanol by purchasing renewable identification numbers, called RINs, to fill the void of cellulosic ethanol. Not surprisingly, petroleum refiners were angered by having to purchase RINs when there was no actual renewable fuel supply to purchase. Refineries and other petroleum organizations have had to petition EPA each year for waivers.

There has been meaningful progress toward commercialization in the last two years. New investments have been made in multiple countries in various technologies. Beta Renewables opened a second-generation biorefinery in Italy and announced plans to open another in North Carolina. KiOR, the largest US cellulosic ethanol producer, pioneered catalytic conversion technologies at one existing facility in Mississippi and plans to use it at another facility. In addition, INEOS Bio announced this past summer that it is now producing cellulosic ethanol on a commercial-scale at a facility in Florida.

The real impact of the proposed reductions is the signal it gives to future investors that the US commitment to the renewable fuel standard is wavering. While EPA reiterated its commitment to renewable fuels, if the federal government takes any more steps to undercut the RFS program, then the entire biofuel industry may be in trouble. The best thing that the industry can do to prevent this is to show that commercial-scale production is feasible.

State government initiatives are also important. In 2007, California adopted a low carbon fuel standard or LCFS that requires the state to achieve a 10% reduction in the carbon intensity of transportation fuels. Like the RFS program, the LCFS is a mix of command and control regulation that requires certain volumes of low-carbon fuels to be mixed into the transportation fuel supply. Also like the RFS program, the mandated volumes under the LCFS increase over time. While corn ethanol has a lower carbon-intensity than petroleum, forms of cellulosic ethanol have an even lower carbon-intensity and widespread usage of cellulosic ethanol could make compliance with the LCFS easier for refineries. Although California is the only state officially to adopt an LCFS, other states have considered similar programs.