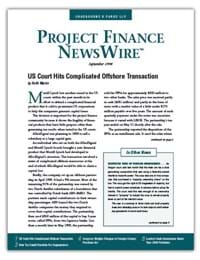 Merrill Lynch lost another round in the US courts within the past month in its effort to defend a complicated financial product that it sold to prominent US corporations to help the companies gene...

The Clinton administration released details in mid-September of a new energy tax credit it wants Congress to enact as part of a package of measures to deal with global warming...

The House is on the verge of amending the Foreign Corrupt Practices Act to make it illegal to offer anything of value to employees of the International Finance Corporation, Asian Development Bank ...

Most lenders are now requiring representations or covenants to ensure that borrowers will not have trouble repaying loans due to computer problems starting in the year 2000...

An Oregon court said last month that the state can tax a local generating cooperative that was using a federally-owned intertie to transmit power...

Philip West, the US international tax counsel, said at an American Bar Association meeting in August that the government has new regulations in the works that will prevent trafficking in tax benef...

INSTITUTIONAL EQUITY PARTICIPANTS FRET ABOUT whether they give states a nexus to tax them by investing as a limited partner in a project.

Support is building in Congress for extending production tax credits

The federal government offers a tax credit of 1.7 cents per kWh for producing electricity from wind or “closed-loop biomass.” Credits may be claimed for 10 years after a project goes into service...

Some expatriates living in China

SOME EXPATRIATES LIVING IN CHINA would be wise to leave the country for at least 30 continuous days or a total of 90 days before the end of the year.

Many inbound investments to date have been structured using trusts. The government proposes to eliminate the advantages by taxing trusts the same as companies commencing in July 2000...

RUSSIA SOURS ON CYPRUS TAX TREATY . . . Foreign investment into Russia is often routed through Cyprus as a way of reducing withholding taxes on interest and dividends at the Russian border.

The Indonesian government is reviewing all tax breaks given to businesses in which Suharto cronies owned interests.

The Brazilian tax authorities said they will subject all financial dealings ...

TURKEY INCREASED ITS CORPORATE TAX RATE from 25% to 30%.

Northern States Power Company won another round in a long-running battle with the IRS over when it can start depreciating nuclear fuel assemblies...

A Good Idea If It Works

Orbital Sciences Corporation expects to save $2 million on state sales taxes in Virginia by having the local ...

SOME CHECK-THE-BOX DETAILS still remain to be worked out.

PP&L lost an argument in a Pennsylvania court last month over whether it had to pay state gross receipts taxes on interest received from customers on late payments on utility bills.

When Congress repealed the investment tax credit in the Tax Reform Act of 1986, it inserted language to let Merrill Lynch have more time to finish work on its “world headquarters” and still claim ...

The federal government offers a so-called section 29 tax credit as an inducement to look for fuel in unusual places.

Lee Sheppard argues that borrowers should not be allowed to deduct “interest” paid on DECS, TRUPS, PRIDES and QUIPPS in an article in Tax Notes magazine in early September...