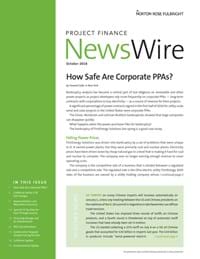 How safe are corporate PPAs?

Bankruptcy analysis has become a central part of due diligence on renewable and other power projects as project developers rely more frequently on corporate PPAs as a source of revenue for their projects.

The California Public Utilities Commission issued a highly-anticipated decision in October revising the formula for calculating exit fees that the three investor-owned utilities in California can charge.

Individuals have to pay US income taxes on only roughly 80% of the income they receive from partnerships, S corporations and other pass-through entities.

Construction stopped despite having permits

Two courts stopped construction of natural gas pipelines in the last few months due to problems with permits.

Two new laws enacted in September will have a major effect on the California energy market.

California became one of two US states in September to require all electricity supplied in the state to come from renewable or other carbon-free sources.

China tariffs set to ramp up

US tariffs on many Chinese imports will increase automatically on January 1, unless any meeting between the US and Chinese presidents on the sidelines of the G-20 summit in Argentina in late November.

Flood of US wind projects ahead

A flood of US wind projects should come to market over the next two years.

Repatriated profits are being used mainly for share buybacks and debt repayments.

Prosecuting foreigners under the FCPA

The Foreign Corrupt Practices Act may not be used to prosecute an individual with no ties to the United States.