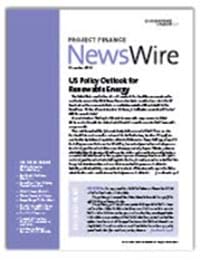 A recent report predicts that the energy storage market, which currently attracts annual investment of about $2.6 billion worldwide, is set to grow to $25 billion by 2021.

Project Bonds and Mini-Perms: A New Era in the Middle East (Special Update)

US import duties on Chinese solar cells will be mostly higher, but start later, than expected...

TREASURY CASH GRANTS for renewable energy projects are subject to audit by the Internal Revenue Service, but the IRS can share little information with the Treasury, the IRS said in an internal memorandum.

Parent guarantees are a benefit to subsidiaries for which the parent company should be paid, and if a fee is not paid, then one should be imputed, the tax section of the New York State Bar Associa...

Retroactive taxes are rarely unconstitutional, according to a report by the Congressional Research Service in late October...

Electricity is not “tangible personal property,” the Oregon Tax Court said in September. Companies are taxed in Oregon only on income that is earned in Oregon...

The comparable sales method is the best approach to valuing buildings, the US Tax Court said...

A property tax break for renewable energy producers in Tennessee is “of doubtful constitutionality,” the state attorney general said in a formal legal opinion in early November...

Interest deductions may be hard to carry back. The US tax laws allow net operating losses to be carried back two years and forward for 20 years until they are used...