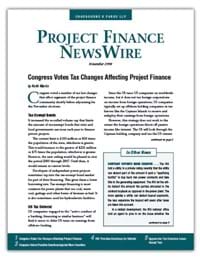 Congress voted a number of tax law changes that affect segments of the project finance community shortly before adjourning for the November elections...

Congress voted, shortly before adjourning for the November elections, to require US economic sanctions against countries that practice religious persecution...

Foreign tax planning often consists of trying to exploit differences in definitions between the US and a foreign country...

A US appeals court held in mid-October that the Internal Revenue Service was right to deny the benefit from a series of complicated offshore maneuvers Colgate-Palmolive undertook in 1989 and 1991 ...

The IRS told a utility in a private ruling recently that the utility can deduct part of the amount it paid a “qualifying facility” to buy back two power contracts and take title to the generating ...

A key issue in the debate will be to what extent US tax rules should favor letting US companies compete on the same terms as the competition in foreign countries or to what extent the focus should...

A Utility Group Commences an Effort

A UTILITY GROUP COMMENCES AN EFFORT to fix foreign tax credit problems in the power industry, but the fix would only help affiliates of regulated electric and gas utilities.

The idea of imposing use taxes is often part of a plan to cut property taxes on regulated utilities and put them on an equal footing with independent generators...

Look for a Showdown Next Year

LOOK FOR A SHOWDOWN NEXT YEAR BETWEEN IOUs AND MUNICIPAL UTILITIES over whether munis can serve customers outside municipal boundaries and still retain the tax exemption on their debt.

LILO’s are a form of lease financing where the owner of a power plant leases his plant to a US equity, which subleases it back...

THE NEW COLOMBIAN GOVERNMENT proposed a series of tax reforms that are expected to take effect next January 1, assuming they are approved by Congress in December.

INSTITUTIONAL EQUITY PARTICIPANTS FRET ABOUT whether they give states a nexus to tax them by investing as a limited partner in a project.

PanAmSat sent a letter to the US Treasury recently asking it to clarify in treaty negotiations with Italy and Korea that the payments for use of transponders are not “rent” or “royalties” that wou...

This will trigger reporting of all corporate tax shelters and also fill in gaps on when tax planning memos from accounting firms are privileged from discovery by the IRS during audits...

Anyone Who Has Tried to Claim Grandfather Rights

ANYONE WHO HAS TRIED TO CLAIM GRANDFATHER RIGHTS for tax benefits or SO2 allowances knows to be careful not to alter his project or contract that was the basis for grandfather relief.

LETTING A FACILITY THAT WAS FINANCED WITH TAX-EXEMPT DEBT sit idle may cause loss of the tax exemption on the debt.

THE SWEDISH CROSS-BORDER LEASE MARKET shut down after a decision this summer by the Regeringsrätten, or supreme court, that denied Swedish lessors depreciation on aircraft ...

The listing is a warning to US companies doing business in these countries to be on the lookout for payments to government officials...

THE SWEDISH CROSS-BORDER LEASE MARKET shut down after a decision this summer by the Regeringsrätten, or supreme court, that denied Swedish lessors depreciation on aircraft that they had leased cross border.

INDIA ACKNOWLEDGED that a most-favored-nation clause in its tax treaty with Holland has the effect of reducing withholding taxes on interest, rents and royalties paid to companies in Holland to 10%.

Owners of build-own-transfer projects in Vietnam

OWNERS OF BUILD-OWN-TRANSFER PROJECTS IN VIETNAM will be subject to a flat 10% income tax rate ...

Poland is Expected to Reduce its Corporate Tax Rate

POLAND IS EXPECTED TO REDUCE ITS CORPORATE TAX RATE from 36 to 32% effective January 1.

Gillette filed suit in federal court recently to fight the IRS over a claim that the company unwittingly triggered US “toll charges” twice on the same appreciation in value of its Mexican operatio...