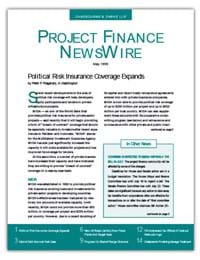 The debt is called MIPS, or monthly income preferred securities. MIPS have rapidly displaced preferred shares in corporate capital structures since they were first introduced in 1993...

Stringent new rules for reducing nitrogen oxide emissions took effect in most northeastern and mid-Atlantic states on May 1...

Among the more intractable challenges in structuring and closing infrastructure project financings in emerging markets has been the tug-of-war between project lenders and political risk insurers (...

Two recent tax rulings offer ideas for how to restructure contracts while minimizing the tax consequences. The rulings are private letter rulings...

Municipalities thinking of contracting out operation of their sewage treatment plants to private companies quickly run up against two barriers...

Most equipment at a project is depreciated over an average useful life for the entire project based on the industry in which the project is used...

Many utilities are divesting generating assets...

Utility asset divestitures may have the effect of increasing property taxes for independent power projects.

The proposal was included in the budget the Hindu nationalist government presented to parliament on February 27.

The changes were in circulars issued by the State Administration of Taxation in November, but only available recently.

A US parent company sold warrants for $X to an unrelated investor. The investor then sold similar warrants to an offshore subsidiary of the US parent...

A Coalition of Companies

A coalition of companies is lobbying to eliminate withholding taxes on interest between the US and Canada.

The case opens the door to possible tax planning...

DEBTS by electing to be treated as “securities dealers” for US tax purposes.

A company could not claim attorney-client privilege for documents prepared by its accountant who is also a lawyer.

Hungary will probably not introduce major tax reforms next year, despite past promises.

US plans no change in sanctions against Libya, India and Pakistan | Norton Rose Fulbright

US sanctions against Libya remain in place, despite a decision by the United Nations last month to lift UN sanctions...

The Czech government is proposing to reduce the corporate tax rate from 35% to 33%.

Only new power projects placed in service after June 1999 would be affected. However, there would be an exception...

Most states figure the income a company has from doing business in the state by applying a three-factor formula.

Discriminatory taxes against telephone companies were struck down in two states

The US Supreme struck down an Alabama tax in late March in the case South Central Bell Telephone Co. v. Alabama...

A Gas Utility Had Unexpected Income from Demand-Side Management Programs

People’s Gas System set up a number of energy conservation programs as required by Florida law with the aim of reducing electricity and oil consumption.

MCI and Telecom*USA both qualified for investment tax credits in 1986.

Scott Paper Company spent money in the late 1980’s on improvements, equipment and furnishings at its headquarters in Philadelphia.

The US Treasury received a letter from Irvin N. Gleim of Gleim Publications, Inc. in Gainesville, Florida recently enclosing copies of newspaper articles ...