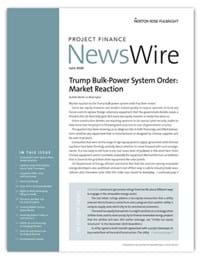 Market reaction to the Trump bulk-power system order has been mixed. Some tax equity investors and lenders moved quickly to require sponsors to fund any future costs to replace foreign adversary equipment ...

A California “split-roll” ballot initiative would change the way commercial property is taxed in California and lead potentially to significantly higher property taxes on solar projects.

Eighty-two percent of power purchase agreements signed with US corporate offtakers in 2019 were “virtual” PPAs that do not involve physical delivery of electricity.

Although the coronavirus pandemic is expected to trim global storage installations by almost 20% according to some analysts, 2020 should still be a record-breaking year for new storage projects in the US.

State of the tax equity market

Many renewable energy developers are having a hard time raising tax equity this year. A number of mainstream investors are no longer writing term sheets. Even investors who are still doing deals are turning ...

A federal bankruptcy court decision in May has called into question the validity of certain “bankruptcy-remote” structures frequently used by businesses, particularly in project financing.

The virus, the bear and the cost of capital

Three lenders and the managing partner of a private equity fund talked in late May about how coronavirus and the economic downturn are affecting the cost capital for the US power sector ...

The Middle East power market, particularly in the Gulf Cooperation Council, is currently undergoing a transformation as the region shifts to more renewable energy.

Subsea cables that are key to economic growth in Latin America are expected to require more than $1 billion in new investment over the next five years.

COVID-19 and financing in emerging markets

Development finance institutions and export credit agencies are called to step into the breach during economic downturns. How are they responding to COVID-19?

Solar securitizations and the Federal Reserve

The New York Federal Reserve Bank confirmed informally by email in late May that it is not prepared to use one of its new lending windows to maintain liquidity in private debt markets to finance ...

A new Trump executive order in early June directs federal agencies to waive required reviews of environmental impacts from proposed infrastructure projects to be built during the COVID-19 pandemic.

Utilities continue to get private rulings from the IRS about different ways to engage in the renewable energy sector.

Changes in US import tariffs remain a constant risk in the Trump era. US companies paid more than twice the import duties last year that they paid in 2017.

Partnerships will have to track another metric called partner “tax capital” starting next year.

A Massachusetts property tax exemption for wind and solar projects does not apply to the extent net metering credits earned by the project are sold to entities, like schools and local governments...

A structured finance transaction was partly rejected by a US appeals court. Three other banks that engaged in similar transactions have gone to court to defend the hoped-for tax results in the transactions.

Production tax credits for wind and geothermal projects will remain at the same level as in 2019.

A New York electricity generator qualified for a $350,000 cap on part of the annual franchise taxes it had to pay in the state.

Like-kind exchanges have been largely limited to swaps of land, buildings, transmis¬sion lines, gas pipelines and other “real property.”

Every summer the IRS collects suggestions about tax issues on which it should issue guidance and then comes up with a priority guidance list.