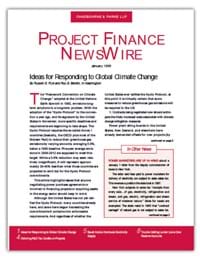 The “Framework Convention on Climate Change,” adopted at the United Nations Earth Summit in 1992, envisions longterm solutions to a long-term problem. With the adoption of the “Kyoto Protocol” to the convention

The Council of Ministers in Saudi Arabia approved proposals for a significant restructuring of its electricity sector on November 30...

The Internal Revenue Service issued final rules in January on how to define “research” that qualifies for a 20% federal tax credit...

Differences of opinion are cropping up in project financing deals where lenders seek security interests in collateral accounts set up to hold reserves to service debt, satisfy maintenance obligati...

The letter said fees paid to power marketers for delivery of electricity are subject to state sales tax. This reverses a position the state took in 1997...

Brazil increased taxes and is reforming others | Norton Rose Fulbright

The Brazilian Senate voted on January 6 to extend a financial transactions tax, called CPMF, for three years and to increase the rate from the current 0.2% to 0.38% in 1999 and 0...

The company is building a telecommunications switching station in Westchester County...

Lee Sheppard urged the government, in an article in late December in Tax Notes magazine, to attack so-called 861 structures that many US companies are using to burn off “overall foreign losses...

The IRS is expected to Shut Down LILO Transactions by February

LILOs are a form of lease financing where a foreign company or US municipality leases rail cars or a power plant to a US equity and then subleases it back.

“CHECK-THE-BOX” rules will be tightened further.

The corporate income tax rate increased from 34% to 35%. However, companies that reinvest profits can defer up to 3% of the tax, for a 32% rate this year...

The corporate income tax rate increased from 33% to 35%. Argentina will impose a withholding tax for the first time on dividends. The rate is 35%...

Look for Guidance Later This Year

LOOK FOR GUIDANCE LATER THIS YEAR on the US tax treatment of international telecoms income.

“SOLID WASTE” may be redefined for tax purposes.

Most Economic Sanctions Against India and Pakistan

MOST ECONOMIC SANCTIONS AGAINST INDIA AND PAKISTAN have been waived until October 21.

INDIA is expected to levy a new tax on electricity consumption, with 66% of the money to go to local ...

BULGARIA REDUCED ITS TAXES effective January 1 in the hope of spurring more investment.

THE ROMANIAN PARLIAMENT voted in late November for a 10-year tax holiday on income from new investments exceeding the equivalent of US$50 million.

RUSSIA RENEGOTIATED ITS TAX TREATY WITH CYPRUS after threatening last summer to cancel the treaty unilaterally.

INLAND REVENUE issued interim guidance in December for companies with global trading desks in London on how much income from trades should be allocated to the United Kingdom.

WATER UTILITIES CHARGE that the US government reneged on a deal involving tax treatment of water interties.

AN EXECUTIVE WHO AGREES TO ACT AS THE “RESPONSIBLE PERSON” for payment of local taxes for his employer in a foreign country may be in for trouble.

Many countries in Latin America impose minimum taxes on asset value to ensure that some tax is paid even in cases where a company is otherwise reporting tax losses. The asset tax in Mexico is 1...

PERUVIAN PRESIDENT ALBERTO FUJIMORI said recently that Peru will reduce its minimum tax from 0.5% to 0.2% of a company’s assets.

INBOUND INVESTMENTS INTO CANADA should not be made with US LLCs, according to two Canadian lawyers.

“FOREIGN SALES CORPORATIONS” are under attack before the World Trade Organization in Geneva.

The government usually holds taxpayers to the form of a transaction when reporting tax results...

TEXAS confirmed that manufacturing companies in the state do not have to pay sales taxes on natural gas they purchase to generate their own electricity.

The Joint Tax Committee in Congress reported in December that 47.8 million Americans will escape income tax liability in 1998 due to deductions and credits. Most are in lower income brackets...