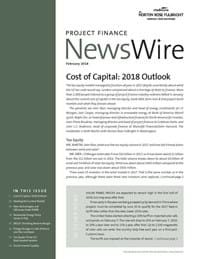 The tax equity market managed to function all year in 2017 despite uncertainty about what the US tax code would say.

A panel of company CEOs and investors talked at the annual Infocast “projects & money” conference in New Orleans in January.

After nearly 40 years with wide-ranging effects on the US electric utility industry, the Public Utilities Regulatory Policies Act — called “PURPA” — has resurfaced.

Changes in government policy can have a big effect on the renewable energy market in the United States.

Texas is the only organized electricity market in the United States where there is growing demand for electricity.

Energy storage in Latin America and the Caribbean

Latin America is in the midst of a dramatic energy transformation.

Back-levered loans remain a core financing tool in the US renewable energy market.

The US Environmental Protection Agency sent interim guidance to its regional offices in late January to fill in details of its plan to let states lead on enforcement of federal environmental laws.

Solar panel prices are expected to remain high in the first half of 2018, but may ease after that.

Various energy tax incentives were extended by Congress as part of a two-year budget deal in early February.

Coal plant retirements may be delayed by the US Department of Energy.

H-S-R filing thresholds will go up at the end of February.

The solar construction-start rules are “actively being worked on,” according to Hannah Hawkins, the lawyer for energy tax issues in the office of tax policy at the US Treasury.

What should one make of the dip in number of new power purchase agreements signed in 2016 to sell electricity directly to large corporate buyers?

CFIUS is becoming a major roadblock for acquisitions by Chinese companies.

Aircraft non-payment insurance is being used in some aircraft financings.

US offshore wind is gearing up quickly.

An Oklahoma bill that would cap tax credits for generating wind electricity and, at the same time, impose a tax on such electricity fell short of the number of votes needed to pass.

Community choice aggregators and rooftop solar took about 25% of the retail load away from investor-owned utilities in California in 2017.

Incurred costs under the 5% test for starting construction may have to be reduced by any credit or discount the developer is given against a future turbine or other equipment order, depending on the facts.

Pledges of interests in Delaware limited liability companies are being mishandled in some transactions.

CO2 allowances that forestry companies receive for preserving trees are not “real property” for REIT purposes, the IRS said.

The Solar Energy Industries Association estimates that the solar tariffs sought by US solar panel manufacturer Suniva would cost the...