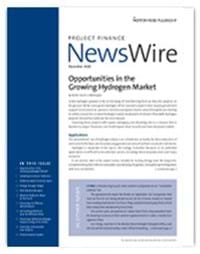 Emerging opportunities in the hydrogen market

The first bankable green hydrogen projects will involve three types of customers. Another five opportunities will emerge next.

Property and casualty insurance premiums have increased as much as 400% over the last two years in the solar market. Some insurance may not be available at any cost.

EXIM has work to do at home

Foreign vendors looking to sell equipment to US projects have an advantage over US manufacturers.

Some developers of standalone battery projects in ERCOT are hedging revenue from ancillary services.

The renewable energy industry has had to play defense the last four years. Now it gets to start playing offense.

Mexican rollbacks move to the courts

The Mexican government has been dialing back private participation in the Mexican power sector. The Mexican courts have been holding firm against the changes in policy.

The tax equity market expects to see two offshore wind projects in the market for financing in 2021 and another two in 2022.

An evolving market in Asia for offshore wind

Most Asian offshore wind activity to date has been in Taiwan, but the new opportunities are in Japan, South Korea, Vietnam and India.

Among a handful of notable developments as 2020 ends is an uptick in interest in renewable fuel projects.

President-elect Biden has ambitious plans on climate change, but will have to focus mainly on what can be done through regulatory and executive actions.

The Biden Administration​ will face greater challenges than any recent administration, not the least of which is the possibility that Donald Trump will remain a constant thorn after leaving office.

Multiple tariff issues are in play that could affect project costs.

Two provisions in the National Defense Authorization Act that Congress is expected to send imminently to President Trump are getting attention from the project finance community.

The LIBOR transition remains a work in progress.

Public utility property questions are taking up a lot of IRS time, but perhaps not for much longer.

Some renewable energy companies are thinking about special-purpose acquisition companies — called SPACs — as a possible means to access the public equity markets.