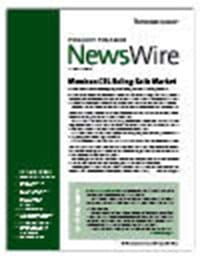 More than 20 requests for injunctions have been filed by generators, industry associations and other interested parties in Mexico to challenge a government ruling...

A panel talked about the current market for financing offshore wind projects in the United States.

Build-own-transfer agreements are playing a bigger role in the renewable energy sector as utilities decide they would rather own projects than enter into long-term contracts to buy the electricity.

A panel of two sponsors, two lenders and one tax equity investor rolled quickly through a wide range of topics of current interest at the Solar Power International 2019 convention this fall in Salt Lake City.

There is no cookie-cutter joint venture or joint development arrangement.

Tracking accounts are used in many fixed-volume hedges to mitigate electricity basis risk.

The United Nations said in a report in late November that there is a significant gap between the world’s current combined pledges to cut greenhouse gas emissions...

A tax equity partnership between a regulated utility and a tax equity investor received a partial blessing from the IRS.

The uncertainty around tariffs makes trying to do business like negotiating deals on a trampoline with an overweight 73-year old bouncing up and down.

The latest CFIUS report to Congress in November shows a dramatic increase in the number of inbound US acquisitions that are being reported to the US government since Trump took office.

Deficit restoration obligations and negative “tax basis capital accounts” are getting more attention from the IRS.

The LIBOR transition became a little easier in October.

Two new Trump executive orders may make it harder to get guidance from federal agencies in the future about what US law requires.

An investment tax credit can be claimed on an increase in tax basis in an existing project, the IRS said.

REITs can treat income related to some state tax credits and carbon allowances as good income, the IRS said.

Cryptocurrencies continue to receive high-level attention from the IRS.

A finder’s fee is not deductible if paid by a target company on behalf of the company that acquired it, the US Tax Court said.

US installed wind capacity stood at 100,125 megawatts at the end of the third quarter 2019, according to the American Wind Energy Association.