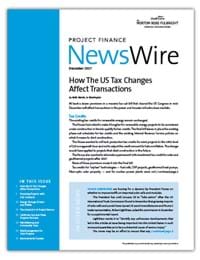 How the US tax changes affect transactions

At least a dozen provisions in a massive tax-cut bill that cleared the US Congress in mid-December will affect transactions in the power and broader infrastructure markets.

As many as 23 counties in California have

Developers are focusing on what terms to put in new offtake agreements ...

The liberal art of project finance

Greatly appreciated parental guidance on the value of the liberal arts educations children are receiving.

Prices for greenhouse gas emission allowances under the California cap-and-trade program have rebounded in 2017.

The shifting net metering policies in the United States affect the economics of community solar as well as residential solar.

A draft tax-cut bill released Thursday by the chairman of the House tax-writing committee is a mixed bag for the power industry and infrastructure trade.

The US House walked back a provision in its tax-cut bill that has frozen the wind tax equity market.

A base erosion and anti-abuse tax, in a massive tax-cut bill expected to be taken up next week by the US Senate could cause some tax equity investors to exit the market for renewable energy projects.

The US Senate made two last-minute changes in a massive tax-cut bill yesterday that could prove harmful to renewable energy.

At least a dozen provisions in the final tax bill released Friday night by US House and Senate negotiators will affect transactions in the power and broader infrastructure markets.

A top credit rating agency, Moody’s Investors Service Inc., put coastal communities in the United States on notice in late November that they must either start preparing for the impacts of climate change...

Solar companies are bracing for a decision by President Trump on whether to impose tariffs on imported solar cells and modules.

US Energy Secretary Rick Perry's proposal to require grid operators in competitive markets to dispatch coal and nuclear power plants ahead of other types of power is expected to...

CFIUS may be given authority to review more inbound foreign investment into the United States and to charge filing fees for doing so.

Solar projects were being built at an average cost in the United States of $1.03 a watt in the first half of 2017

Two lawsuits that test whether the amount paid to buy a power project must be allocated partly to the power purchase agreement are moving forward.

Provisions in some "red" states to require super-majority votes by state legislatures before taxes can be increased are serving as an impediment to imposing taxes on wind farms.

A solar incentive payment from a utility counts as good income for a real estate investment trust.

A jointly owned company formed by a group of municipal utilities and electric cooperatives to enter into a...

MORE CREBs money is available, but the new tax-cut bill passed by Congress repeals the authority to issue new bonds after this year.