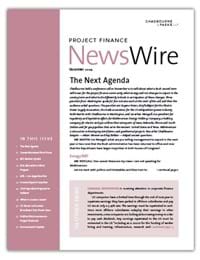 Chadbourne held a conference call on November 12 to talk about what a Bush second term will mean for the project finance community, what energy and tax changes to expect in the coming term and wha...

Sales of merchant power plants have more than quadrupled so far in 2004...

The number of states with programs to promote the development of renewable energy continues to grow, creating both new opportunities and complexities in the US power market...

The developer of a windpower project must contend with many risks that may not affect a more conventional power plant...

Banks and other creditors are developing creative ways of restructuring distressed companies in Argentina...

US power companies may be able to use income deposit securities to cash out of power projects. Coinmach Service Corp...

The Dutch government presented an action plan on October 11 for restructuring the energy market in Holland...

When Is a Lease a Lease?

A US district court in Illinois said in mid-November that a lease is a “lease” if local law says it is...

US Moves to Promote Broadband Over Power Lines

Can electric companies compete with telephone and cable companies? Michael Powell, chairman of the US Federal Communications Commission, is convinced they can...

The phone rings. Anne shudders. A project financier, she knew what was coming and hated these calls...

A municipal utility cannot be given an interest in a power plant or sold a turbine that is already under construction without tax complications...

Gas interties are out of favor with the IRS. Owners of independent power plants must negotiate terms with local utilities to let them connect to the grid...

CALIFORNIA will continue to assess 44 independent power plants at the state level.

A ‘Claim of Right”

A foreign tax strategy that the IRS dislikes is proliferating...

MEXICO will not allow Mexican companies to deduct interest paid on debt if the companies are too “thinly capitalized.”

VENEZUELA said that it is raising the royalty tax on foreign producers of heavy crude oil in Venezuela from 1% to 16.6% per barrel of oil.

Dividends that US shareholders receive from foreign corporations sometimes qualify for tax at a reduced rate of 15%. The IRS answered questions about when the lower rate applies in mid-October...

DISGUISED SALES of partnership interests get attention from the US tax authorities.

A lessee had to pay sales taxes not only on rents, but also on the “additional rent” that the lessor collected for annual property taxes...

STATE TAX CREDITS can be sold and the buyer can deduct his purchase price in the year he uses the tax credits, the IRS said again.

FOREIGN ELECTRICITY SALES do not have to be reported to the IRS as potential corporate tax shelters.

A partnership had to report taxable income in the US when one of its partners repaid a loan from a bank. The partner had guaranteed part of the loan. The partnership borrowed $18...

PENNSYLVANIA is looking at possible changes in the state tax system.

South Dakota is weighing two tax breaks to induce developers to build coal-fired power plants in the state. The projects are a $1...

The corporate tax bill that President Bush signed on October 22 would reduce US taxes on domestic manufacturing income.