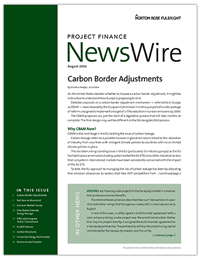 As the United States debates whether to impose a carbon border adjustment, it might be instructive to understand how Europe is proposing to do it.

Are the goals the US has set to have a carbon-pollution-free power sector by 2035 and a net-zero-emissions economy by 2050 realistic? What type of efforts do they imply?

Banks put battery deals coming to market into two main buckets. The pricing and debt-service-coverage ratios are starting to diverge based on the type of storage project.

The government machinery needed to address transmission is starting to turn. The Federal Energy Regulatory Commission is addressing transmission reform for the first time in roughly a decade ...

Investors are finding value in owning sites through “landcos” and leasing the sites to developers. Developers are also using the structure on their own.

A wave of deals has closed recently where universities turn over campus utility systems to private companies. The private companies make substantial upfront payments in exchange for fees ...

The last decade was hotter than any decade in 125,000 years. Atmospheric carbon dioxide is now at a two-million-year peak. These are a few of the key takeaways from the latest comprehensive UN climate update.

Utilities are financing solar projects in the tax equity market in a manner that produces enhanced benefits.

Xinjiang issues are getting closer attention from counsel.

A hoped for easing of tariffs affecting the renewable energy sector once President Biden took office has not happened.

Four California CCAs that are planning to use a form of prepaid power contract may find the structure hard to implement.

Projects on federal land are probably not be exempted from local property taxes, but it depends on the facts.

CFIUS said in its latest annual report to Congress at the end of July that is now takes an average of 45 business days to review proposed acquisitions of US companies by foreign investors.

Most interconnection payments and government grants to investor-owned water and sewer utilities will no longer have to be reported by the utilities as income...