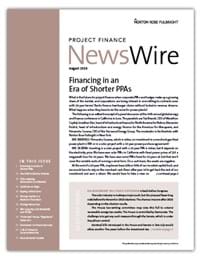 Financing in an era of shorter PPAs

What is the future for project finance when corporate PPAs and hedges make up a growing share of the market, and corporations are losing interest in committing to contracts even with 10-year terms? Banks fin...

The shift to electric vehicles

The transportation sector is headed toward mass electrification. It accounts currently for 29% of energy usage in the United States.

A US Supreme Court decision in late June will make it easier for federal agencies to withhold confidential information received from private companies from public disclosure when responding to Freedom of Inf...

What does the PG&E bankruptcy suggest for the utility business model? Some banks have stepped back from financing new projects in California for fear that future wildfires may threaten other utilities.

Anyone buying a wind farm should be aware of a number of issues that can affect the value or even viability of the project.

Raising capital in a market in transition

Capital is usually harder to raise during periods of uncertainty about government policy. Lenders and investors adjust to changes in the market itself.

Developers are pushing ahead with more gas-fired power projects, and lenders stand ready to finance them, but equity may be in short supply.

Several major issues that affect large segments of the power industry remain on the Federal Energy Regulatory Commission agenda as it heads into the fall.

Under the Delaware limited liability company statute, an LLC can create different combinations or series of members, managers, interests or assets by p...

A group of top finance officers at wind and solar developers talked about current issues crossing their desks at the 30th annual global energy and finance conference in California in June.

The US Department of Agriculture has taken a significant step toward finalizing its revisions to Obama-era policies for conserving the greater sage grouse and its habitat in five Western states.

An investment tax credit extension is back before Congress.

Tariffs remain a significant hazard for developers who must commit to supply electricity at fixed prices only to have the US slap an import tariff on key equipment before the project can be built.

Developer fees are in less favor after a decision by the US claims court in June to bar a wind developer from adding developer fees to the tax basis it used to calculate Treasury cash grants on two wind farms.

The four-year window to finish some renewable energy projects to qualify for federal tax credits will be extended in one situation, the IRS said.

The LIBOR transition is getting high-level attention in Washington.

Taxpayers got through to the Internal Revenue Service, when calling during the last filing season about compliance issues, only 33% of the time after an average wait of 41 minutes, according to Nina Olson, the

Cryptocurrencies are in the IRS crosshairs.

Some transactions must be reported to the IRS as potential corporate tax shelters.

Start-up companies can be actively engaged in business even though there are no sales.

Floating solar projects may not command the same market share ultimately as offshore wind, but they are starting to get traction.

Base case models in tax equity deals can take a person quickly into the weeds, but the details are important.

Moody’s said in early July that it expects coal to account for as little as 11% of US power generation by 2030.