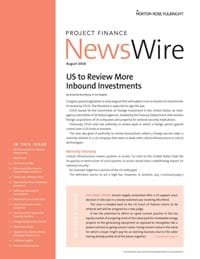 US to review more inbound investments

Congress passed legislation in early August that will subject more in-bound US investments to review by CFIUS. The President is expected to sign the law.

The session this year was a wide-ranging discussion about new trends in the market with the investment banker or banker equivalent of a panel of journalists on the Sunday morning talk shows.

The hunt for PPAs

Three prominent wind developers and the head of electricity procurement for a utility talked about lessons from recent utility procurements, corporate PPAs and hedges.

What next after Ontario cancels power contracts?

Recent headlines have captured the decision of the newly elected Ontario provincial government to cancel more than 700 renewable energy contracts in the province.

The Turkish Ministry of Energy launched a tender for the country’s first offshore wind power plant on June 21. The deadline for bid submissions is October 23.

Depreciation bonus regulations that the IRS issued on August 3 answer a number of questions that have been coming up this year in M&A and tax equity transactions.

Suffering from lack of transmission

Four panelists talked about the growing problems in this area at the 29th annual global energy and finance conference in June.

Four blockchain pioneers talked at the 29th annual global energy and finance conference in June about what blockchain means for the power sector.

Solar developers got long-awaited guidance from the Internal Revenue Service today about what must be done on future projects to be considered under construction in time to qualify for federal tax credits.

Four prime movers in the push to install batteries talked about where installation of batteries already makes economic sense and what is driving current adoption.

Various car manufacturers have announced dramatic increases in electric vehicle production in response to domestic and international pressure to electrify the transportation sector.

Two bills have been proposed in the California legislature that could affect renewable energy companies in California: SB 100 in the state senate and AB 813 in the state assembly.

The Trump administration announced in August to roll back Obama-era automobile emissions and fuel efficiency standards and revoke the long-standing authority of states to impose stricter standards.

A physical presence is no longer required for companies making sales to have to collect sales taxes, the US Supreme Court said in late June.

US import tariffs remain a challenge

The US started collecting a 25% tariff on July 6 on a list of Chinese goods that accounted for $34 billion in imports last year.

Carbon taxes remain in the spotlight, although only dimly so.

The IRS launched a new taxpayer compliance campaign aimed at cryptocurrencies on July 2.

US installed wind capacity was 90,004 megawatts at the end of June.

US installed solar capacity was 55,900 megawatts at the end of the first quarter 2018.

The construction-start rules for wind farms are under attack from the coal lobby.

Solar panel prices are expected to fall 34% by year end to a global average of 24.4¢ a watt, according to Bloomberg New Energy Finance.

Community choice aggregators in California bought 57.1% more electricity from wholesale suppliers in the first quarter of 2018 compared to the same period in 2017.

Gas pipelines got a break from the Federal Energy Regulatory Commission.

Electric cooperatives are concerned that they will lose their federal income tax exemptions because of the tax reforms that were enacted last December.

Solar tax benefits were allowed to two individuals on three rooftop solar installations after the IRS made a mistake.

American Indians are not subject to US income taxes on gravel mined on the reservation, a federal district court said in late July.