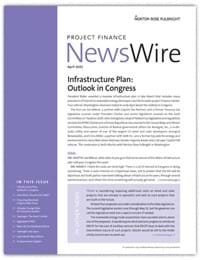 How much shareholder debt?

Determining what mix of debt and equity to use for US acquisitions requires a two-step calculation.

Hedged merchant power and storage projects in ERCOT can still be financed. Lenders are focused after the February cold snap on unmitigated asymmetric risks.

Climate change is making it more risky to serve as a director or officer of some energy companies.

Hydrogen: The next frontier

The market for hydrogen breaks down into four areas. Plug Power expects to use 55 kilowatt hours of electricity to produce each kilogram of green hydrogen.

It is becoming more common to see multiple PPAs signed for a single wind or solar project. Two business models are emerging.

A new wind turbine that can be mounted on light poles along interstate highways has potential. The wind from passing vehicles causes the turbines to spin.

Japan wants to become a “hydrogen society” by 2030. The Middle East could again be key to realizing its energy ambitions.

Various Trump-era environmental positions are either being struck down by the courts or reworked by the Biden administration. New York has streamlined its approval process for new renewable energy projects.

Texas is considering imposing additional costs on wind and solar projects that are already in operation ...

Port backlogs are adding to cost and could delay construction of some projects.

Pressure continues to build to block imports into the United States of solar panels made with polysilicon ...

US states are chafing at a provision in the $1.9 trillion COVID relief bill that Congress enacted in March ...

The European Union is expected to release details of a carbon border adjustment in June.

About 15% of us solar projects will reach the end of the recapture period for investment tax credits this year ...

Utility-scale batteries operated with an average round-trip efficiency of 82% during 2019 ...

Solar, wind and storage are expected together to account for 83.1% of new capacity additions this year in the United States ...

California will need to triple the capacity of its power grid and may have to add 6,000 megawatts of new renewable and storage facilities ...

Half the US renewables M&A deals in 2020 were with foreign buyers.

Not that tax equity.