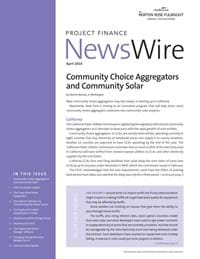 New community choice aggregators may face delays in starting up in California.

A panel of four prominent tax equity investors discussed how the recent overhaul of the US tax code is affecting the solar tax equity market.

Green banks in six states are emerging as valuable and distinct financial partners for developers and lenders seeking to lower their costs of capital.

How electric vehicles are transforming the power sector

A panel of experts talked about how the move to electric vehicles is affecting the power sector at an Infocast storage conference in San Francisco in early March.

Changes in a US tax credit for carbon sequestration should make the tax credit more attractive to the tax equity market.

Blockchain and the energy sector

Blockchain has become a buzzword, but leaving the hype aside, when applied to the energy sector, it has the potential to reduce business complexity and improve both profitability and customer experience.

Anatomy of an ICO

A growing number of companies are turning to initial coin offerings—called ICOs—as an innovative way to raise capital.

The engine that drives storage: Software

A group of software experts talked about warranties, bankability and other issues around software at an Infocast storage conference in San Francisco in early March.

A US appeals court heard arguments in mid-September on the legality of permitting rules that the US Environmental Protection Agency issued in 2014 for cooling water intake structures at power plants.

Tariffs: effect on US power sector

Uncertainty around what US import tariffs the Trump administration might impose is making it difficult to get fixed-price quotes for equipment that may be affected by tariffs.

Sales of partnership interests and “excess” cash distributions by US partnerships to foreign persons require US tax withholding after the latest overhaul of the US tax code.

Carbon taxes are potentially in play in seven US states, but they are hard to enact.

Bitcoin mining could use as much electricity in 2018 as all electric vehicles are expected to use in 2025, according to a report by Morgan Stanley.

Interconnecting to a distribution line did not trigger taxes to the utility, the IRS said.

Pipeline companies that operate as master limited partnerships will no longer be able to pass through an income tax charge to customers as part of cost-of-service rates, the Federal Energy Regulatory Commission

American Indians are subject to US income taxes on gravel mined on the reservation, the US Tax Court said in March.

Some refined coal transactions will remain audit targets after a new IRS field directive was made public in mid-March.

Putting a conservation easement on a project site did not lead to a tax deduction.

Bribery investigations were underway at year end 2017 in 82 countries, according to the latest “Global Enforcement Report 2017” released in March by TRACE International.

Bidders in the solicitation by the Public Service Co. of Colorado to buy 1,800 megawatts of electricity were allowed to refresh their bids in late February.