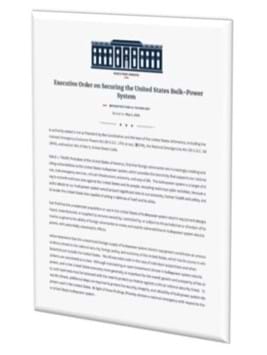 On May 1, President Trump issued an Executive Order banning the use of certain unspecified grid equipment manufactured by foreign adversary countries.

The Order raises more questions than it answers. Energy storage developers in particular are struggling to figure out what it means for their businesses, procurement activities and projects. In this blog post, we identify three critical questions for storage developers and sponsors, as well as lenders and investors active in the space.

Are battery cells, modules and packs covered by the order?

The order defines bulk power systems as “facilities and control systems necessary for operating an interconnected electric energy transmission network” as well as “electric energy from generation facilities needed to maintain transmission system reliability.” This language appears to be lifted from Section 215 of the Federal Power Act (FPA), which governs reliability of the bulk power system. The order does not, however, make any reference to the FPA or the agency charged with its implementation, the Federal Energy Regulatory Commission (FERC). Thus, it is premature to assume any of the FERC precedent related to identifying elements of the bulk power system will apply.

It appears a standalone battery connected to the transmission grid at a voltage at least equal to 69 kV and injecting energy to provide voltage support would be covered by the order because it ensures transmission system reliability. The order does not apply to batteries that are sited behind the customer meter or on the distribution system.

Are balance of system components covered by the order?

The order's inclusion of “control systems” could potentially cover inverters, power conversion systems and battery management system (BMS) hardware. The order states that it is intended to guard against “malicious cyber activities”, among other threats to the grid. This could signal an increased level of scrutiny for the BMS given its vulnerability to remote attacks and the crucial role it plays in maintaining the battery system in a non-hazardous state.

Are Chinese battery vendors and US companies that have manufacturing facilities in China covered by the order?

The order covers bulk power system equipment “designed, developed, manufactured, or supplied by persons owned by, controlled by, or subject to the jurisdiction or direction of a foreign adversary.” The foreign adversary countries have not yet been identified, but it appears the order is aimed at China. If batteries are covered equipment, then the order could have significant ramifications for supply chains. According to Bloomberg New Energy Finance, China accounted for 73% of global lithium-ion cell manufacturing capacity in 2019. The US was a distant runner up with 12% of global capacity.

It is unclear whether US companies that have established manufacturing plants in China would be considered "subject to the jurisdiction or direction of a foreign adversary". Tesla, for example, recently opened a Gigafactory in Shanghai although production appears to be geared towards the electric vehicle market.

Looking ahead, the Secretary of Energy is required to publish regulations explaining how the order will be implemented in practice no later than September 28. The implementing regulations are expected to identify the particular countries and persons that will be considered foreign adversaries and establish procedures to license transactions otherwise prohibited by the order.

In the meantime, storage developers may want to consider using alternative suppliers to Chinese companies and companies manufacturing equipment within China and other nations with US trade sanctions.

In addition, if the battery will be directly tied to the transmission grid and is subject to utility control, it may be wise to frame the utility’s dispatch rights in terms of regulating the ramp rate at which the utility will accept power rather than balancing frequency of the grid.

There could also be an opportunity for individual developers to obtain clarification from the DOE. In a recent interview with the press, DOE Assistant Secretary Bruce Walker suggested developers of power plants that tie into the grid could “work with the Department of Energy ... with regard to understanding places on the system that we're more concerned about or not.”