States push to keep nuclear plants alive In the US


Nuclear reactors provide close to 20 percent of domestic electricity generation, and approximately 60 percent of carbon-free generation, in the United States. Closure of six nuclear reactors since 2013 and the likelihood of closure of several other reactors in the coming years has brought to the forefront a range of short- and long-term challenges nuclear power is facing in an ever evolving energy sector. The nuclear power industry has found it difficult to compete with low-cost natural gas power plants in restructured electricity markets.
Reactor Fallout
Source: U.S. Energy Information Administration, Annual Energy Outlook 2017 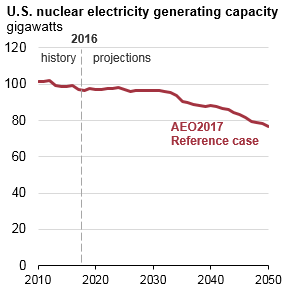 In August last year, New York approved Zero Emissions Credits (ZECs) for Exelon’s three upstate nuclear facilities (R.E. Ginna, FitzPatrick and Nine Mile Point) that will compensate the plants in the first two years at a rate of $17.48 per MWh, based on social cost of carbon and the avoided carbon emissions the plants represent (around 15 million metric tons each year). The rate will be adjusted every two years based on factors including the social cost of carbon and market conditions. The subsidy is projected to cost around $7.6 billion over a 12-year period. The New York Public Service Commission expects the average residential customer to pay an additional $2 per month on electricity bills.
Illinois approved the Future Energy Jobs Bill that will offer around $235 million per year in ratepayer subsidies to Exelon’s Clinton and Quad Cities plants by purchasing ZECs from the plants and thereby compensating the plants for producing carbon-free electricity. The contract for purchasing ZECs runs 10 years.
The Wisconsin Legislature ended a moratorium on new nuclear construction signaling support from policymakers for nuclear power.
In Ohio, House Bill 178 was introduced in April this year to create a ZECs regime requiring electricity distribution companies to buy the credits in proportion to the amount of electricity purchased from nuclear plants, effectively creating a ratepayer-financed subsidy. FirstEnergy, owner of two nuclear plants that would qualify for the Ohio subsidies, estimated the cost of credits to electricity customers to be about $305 million in its first year, or about an extra $5 per month per customer. The Bill is currently stalled but the House Public Utilities Committee could resume deliberations in the fall.
Given the interplay of the recent efforts by states to ensure that nuclear plants receive sufficient revenue to continue operating and the wholesale electricity markets, the issues relating to compensation for nuclear’s attributes are now being considered by the Federal Energy Regulatory Commission (FERC). However, opponents of nuclear subsidies continue to fight. On July 17, energy generators and environmental groups appealed a federal judge’s decision to uphold the validity of the Illinois’ Future Energy Jobs Bill. Energy generators contend that, if upheld, the Illinois decision would effectively strip FERC of its authority to regulate wholesale markets, would harm ratepayers, and threaten FERC’s ability to drive investment in energy infrastructure. Overturning the lower court decision preserving the Illinois subsidies could influence a similar case in New York that is challenging the New York ZEC program.
Share this