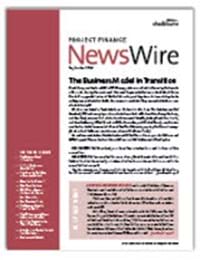 The Business Model in Transition

David Crane, president and CEO of NRG Energy, said provocatively in the spring that people will soon be buying the equipment they need to generate their own electricity at Home Depot...

The Obama administration hosted a commercial summit among heads of 50 African countries in Washington in early August...

Tales From the Dark Side of Emerging Markets

Government intervention in emerging markets is a constant challenge...

What has the market learned from the solar securitizations to date? How much do they reduce the cost of capital? What are their potential uses? The key players in the transactions to date talked a...

The US Department of Energy reopened the window in July for applications for federal loan guarantees for innovative renewable energy projects. The window will remain open until January 14, 2015...

A group of veteran bankers have a discussion about new financing trends, including the term loan B market, green bonds, state green banks, yield cos, financing for merchant plants and other topics.

The US Government Moves to Encourage More P3s

A Brighter Outlook for the Other Tidal Power

What practical lessons are developers taking away from projects in Mexico and Chile? How do risk-adjusted returns compare on Latin American projects to projects in the United States? Four develope...

New proposed rules that the US Environmental Protection Agency issued in early June to limit greenhouse gas emissions from existing power plants have been met with both a chorus of praise and a political and...

Additional construction-start guidance that the Internal Revenue Service issued in early August will allow more wind farms to be financed in the tax equity market.

REITs are getting new attention after an IRS ruling to a telecom company.

Master limited partnerships received a jolt in early August with news that Kinder Morgan, one of the first adopters, is abandoning the structure and moving ts assets into a corporation.

A purchase price allocation worked in the taxpayer’s favor.

Minnesota took the first step in early August toward assigning a value to solar electricity.

Colorado treats sales of electricity as a “service” rather than a sale of “property,” the state Supreme Court ruled.

CFIUS lost a round in court.

Refundable state tax credits must ordinarily be reported as income, the IRS said.

Foreign ship owners who hold permits to operate on the US outer continental shelf and have not filed US tax returns are being contacted by the IRS.

China is requiring that capital gains taxes be paid on some indirect sales of shares in Chinese companies.

A solar rooftop company that entered into a long-term power contract to supply electricity to a city building in Dubuque, Iowa is not violating the monopoly the local utility holds to make retail electricity...

Solar rooftop systems in Puerto Rico qualify for investment tax credits and accelerated 5-year depreciation if owned by a US partnership with all US corporations or citizens as partners, the IRS ruled.

Companies putting new equipment in service in the United States have been allowed off and on since 2001 to deduct a fraction of the cost or “basis” immediately.

Australia rescinded a carbon tax in July that had been in effect for the past two years.

The credits are in section 48A of the US tax code.

Bernstein Research reports that almost all US regions are expected to need additional capacity over the next 10 years to maintain reserve margins ...