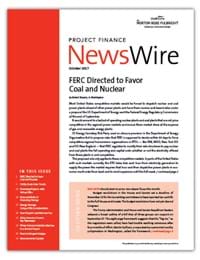 Most United States competitive markets would be forced to dispatch nuclear and coal power plants ...

Four solar industry veterans had a conversation in late August about the top trends in the US utility-scale solar market ...

Nuts and bolts of financing storage

The next big challenge for energy storage{comma} after bringing down the cost ...

Developers are focusing on what terms to put in new offtake agreements ...

Your project’s just not into you

I have been struck by the substantial number of stalled projects.

An energy and infrastructure boom across Africa has given rise to a motley group of mega-projects on the continent that is attracting investors (particularly from China) and boosting economic growth.

When criminal liability attaches to a busted project

Executives and directors of infrastructure developers may be wondering under what circumstances they could face individual criminal prosecution for a busted project in the wake of news that ...

A US appeals court heard arguments in mid-September on the legality of permitting rules that the US Environmental Protection Agency issued in 2014 for cooling water intake structures at power plants.

Tax cuts should start to come into clearer focus this month.

FERC section 203 filings will no longer be required before closing most tax equity partnerships to finance US renewable energy projects.

Maryland offshore wind projects could be imperiled by a provision that Rep. Andy Harris (R-Maryland) added to a House appropriations bill.

Pennsylvania took a step back in early October from imposing a new tax on virtual electricity trades across the PJM grid.

A Chinese acquisition of a US company was blocked in September.

Solar outpaced other forms of electricity in the United States for the first time in 2016 in terms of new capacity additions.

Partnerships will not have to pay penalties for missing a new

The US Treasury moved closer in early October to withdrawing two sets ...

Private business use of municipally-owned power plants and transmission lines ...

The latest forecast by the International Energy Agency ...