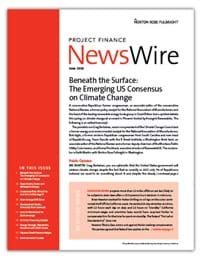 Beneath the surface: The emerging US consensus on climate change

A conservative Republican former congressman, an associate editor of the conservative National Review, a former policy analyst for the National Association of Manufacturers ...

Opportunity zones have been something of a disappointment so far to renewable energy developers. Developers have been looking at them as a possible way to raise equity for their projects.

Covariance risk: What it is and how to manage it

Project sponsors, banks and tax equity investors in transactions with hedges may be overlooking some risks that wind projects are bearing. Each risk should be borne by the party best able to manage it.

How storage will grow

Energy storage is a solution to a range of problems. Different “use cases” are getting traction. Storage has not yet reached a tipping point in the United States, but adoption is accelerating.

A US Supreme Court decision has left room for debate about when development banks can be sued in US courts.

How to plan ahead for back-leverage

Cash is king as developers race to start construction on US projects before wind and solar tax subsidies disappear.

Senior executives of four solar companies talked at the annual Solar Energy Industries Association finance workshop in New York this spring about the state of the market.

Standard warranties for lithium-ion batteries covering both performance and defects are two years, but extended warranties can be purchased.

Norton Rose Fulbright holds internal training sessions for lawyers in its projects group. The following is from a session in mid-June about physical fixed-volume hedges.

US economic growth is causing carbon dioxide emissions from sources like factories, planes and trucks to surge.

Offshore wind projects more than 12 miles offshore are less likely to be subject to state laws after a US Supreme Court decision in mid-June.

Tax extenders are starting to move through Congress.

Production tax credits for some renewable energy projects will be slightly higher in 2019.

Solar projects owned by regulated utilities are not “public utility property” if the electricity is sold at market rates, the IRS confirmed.

Pledging a foreign subsidiary's assets to guarantee repayment of a loan to the parent company triggered income taxes.

An abandonment loss can be claimed on a cancelled nuclear power plant, even though the utility plans to pursue recovery of its costs through a rate increase.

Strong growth in natural gas production in the US will keep downward pressure on natural prices in 2019 and 2020.