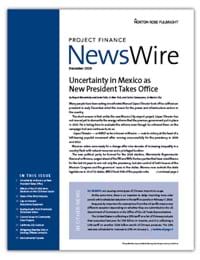 Many people have been asking since Andrés Manuel López Obrador took office as Mexican president in early December what this means for the power and infrastructure sectors in the country.

A group of veteran Washington insiders talked three days after the election about what the results mean for the US power sector, particularly renewable energy.

State of the wind industry

Panelists had a wide-ranging conversation in San Francisco in October about the state of the US wind industry.

The Internal Revenue Service filled in detail in late November about how a new cap works on the interest expense that a company can deduct each year.

When a developer that has sold assets later files for bankruptcy, many of its transactions that it engaged in during the time leading up to its bankruptcy filing will be scrutinized in the bankruptcy case.

Three community solar developers and one aggregator of community solar customers talked at the Infocast Community Solar 2.0 conference about the how the basic business model is evolving and current issues.

Representatives of three California CCAs talked at an American Wind Energy Association finance conference in San Francisco in October about their needs for additional power and some of the challenges they face.

The meaning of “critical habitat” and the scope of protection offered by the Endangered Species Act are being hotly litigated in the appellate courts, with potentially significant implications for developers.

US tariffs are causing some types of Chinese imports to surge.

California will decide next year whether to conform to the tax changes the federal government made in late 2017.

Interest and property taxes must sometimes be capitalized rather than deducted.

US solar installations dipped 15% in the third quarter 2018.

US installed wind capacity stood at 90,550 megawatts at the end of the third quarter 2018, according to the American Wind Energy Association.

Prepaid power contracts are harder to make work after the US tax reforms last December.