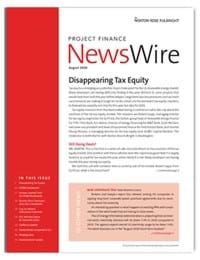 Tax equity is emerging as a potential major choke point for the US renewable energy market.

Independent cogeneration and small renewable energy projects have lost key protections from merchant risks that they have relied on to help secure financing for the past 40 years.

Lessons learned from the PG&E bankruptcy

A group talked in late July about what effect the PG&E bankruptcy has had on the ability to finance renewable energy projects in California and more.

A US Department of Labor proposal to bar retirement plan administrators from considering ESG factors when choosing investments could have a significant effect on the renewable energy sector.

The Internal Revenue Service filled in detail in July about how the cap works on interest deductions and what is considered interest for this purpose. Bumping up against the cap makes borrowing more expensive.

A US government agency that makes loans to support international development is now making loans to domestic manufacturers to help the US respond to the COVID-19 outbreak.

A California Public Utilities Commission decision this summer should lead to wider adoption of micro-grids in the state, at least in the service territories of the three large investor-owned utilities.

Parties to project finance transactions are sometimes asked to accept surety bonds as security in place of letters of credit. There are key differences between the two instruments.

Floating solar – also known as floatvoltaics – is a small but growing segment in the solar energy industry.

The US Supreme Court reinstated a nationwide permit that allows pipeline and utility trenching and construction activity in, or adjacent to, wetlands and other waters regulated under the Clean Water Act.

New corporate PPAs have become scarce. Brokers and lawyers report less interest among US companies in signing long-term corporate power purchase agreements due to uncertainty about the economy.

A US Department of Energy request for information to help it implement the Trump bulk-power system order identifies six foreign adversaries against which the order is directed.

The California legislature may shield nonresidential solar projects from a property tax increase that is on the state ballot this November.

Some analysts are questioning whether SOFR — the new base interest rate that will replace LIBOR in US contracts — is too volatile to serve as a good replacement.

US offshore wind will come close to overtaking offshore oil and gas over the next 10 years in terms of new capital expenditures, according to consultancy Wood Mackenzie.

National banks have been given clearer guidelines by the US Comptroller of the Currency about when they can participate as tax equity investors in partnership-flip transactions.

Utilities keep asking the IRS whether renewable energy projects they plan to own will be “public utility property.”

The property tax assessment on a natural gas pipeline was more than 50% too high, an appeals court said in August.

Carried interests in partnerships earn income that is harder to report as long-term capital gain.

Oregon lost another round in a long battle with the BC Hydro trading arm, Powerex, over whether electricity and gas that the company sells to customers in California, but that pass through Oregon, can be taxed.

Virginia told Walmart that it could not enter into one or more corporate power purchase agreements to buy electricity for its 188 stores in the state.

Government payments to induce a company to relocate had to be reported as taxable income, a US appeals court said in late July.

American Indians are subject to US income taxes on gravel mined on the reservation, a US appeals court said in August.

A tax planning strategy is not a trade secret, a US appeals court said in late July.

New sleep aid. TaxAct advertises on its website a new recording of a person reading the US tax code.