Stories from the NewsWire: solar and wind curtailments 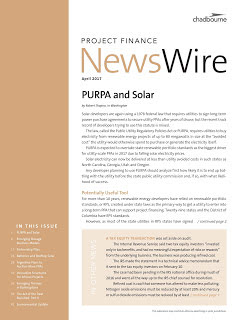 Oversupply and the duck curve are of increasing concern as renewables make up more of the energy mix. In this article from the April 2017 Newswire, Keith Martin, partner in Chadbourne's project finance group, discusses solar and wind curtailments resulting from heavy solar penetration in California and the effects that these curtailments are having on the negotiation of power purchase agreements.

Whether curtailment payments are excused in power purchase agreements can vary depending on the cause of the curtailments. If the curtailments are due to system operating problems, the offtaker usually does not have to pay. While economic causes of curtailments generally do not excuse payment by offtakers, a new trend is emerging in regions of the United States with higher curtailment risks.  In these regions, such as California, offtaker payments are being excused up to a certain capped monetary value or number of hours before the offtaker's payment obligations begin. Including such terms in power purchase agreements will likely continue as more renewables are added to the grid and lenders, generators and offtakers adjust to this new reality. The full article can be found here.